One of the few RPGs released for Sega's ill-fated Dreamcast, and like many games on the system, it clearly has a lot of ambition and passion behind it.  But does it stand out from its competition, or just get lost in the shuffle? 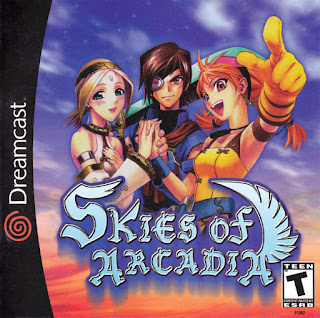 As one of the Dreamcast's early adopters and a big RPG fan, I was definitely excited to see Rieko Kodama return to produce another game; Phantasy Star quickly became one of my favorite franchises after I played it for its imaginative setting, traditional yet challenging gameplay and innovative features (including combination spells and auto-battle several years before they would come standard in the genre).  So to see her bring out another property on Sega's newest (and ultimately last) console held a lot of promise.

Skies of Arcadia certainly succeeds in capturing that trademark Sega charm, delivering an imaginative and visually interesting setting throughout.  The entirety of the game, as its name implies, takes place in the skies, with the player (and numerous NPCs) travelling between a series of floating islands through the use of airships.  The story also centers around a band of pirates known as the Blue Rogues as they do battle with the Valuan Empire, a technologically-advanced country seeking to conquer the world by seeking an ancient power.  This results in things like towns, fortresses and dungeons being built into the islands themselves, resulting in a very distinct and memorable world to explore, as well as ship-to-ship battles that offer quite a bit of visual spectacle.  The setting and overall layout of the game's world makes one wonder if Nintendo's Wind Waker, released several years after the fact, drew some inspiration from this game with its overall design; of it, in turn, drew some inspiration from Mega Man Legends.

Combat in the game is the traditional turn-based style, though the mechanics therein are changed up slightly from the traditional RPG fare.  Characters' weapons are invariably armed with one of the game's six elements (Water, Fire, Wind, Lightning, Ice, and Life), though once they acquire magic of a given element, the weapon's element can be swapped at a button press prior to making an attack.   Magic is handled on a somewhat different principle than most; every spell costs a single MP, but spells and special moves are governed by a Focus meter; generally, the more powerful the move, the more Focus it costs to cast.  Focus gradually builds up over the battle, but can also be manually raised by passing a turn with the Focus command.  This makes combat considerably more interesting than most RPGs of the time - rather than simply spamming one's best attacks, it becomes important to balance one's Focus gauge so that the party can adapt to a given situation; if you're caught by a big attack and don't have enough in your Focus gauge to heal your party, for example, then you can be in real trouble.  At least, this is true for much of the early game - by the end magic becomes largely useless, as items begin to perform the same function as spells but require no MP or Focus to use.  Instead, you'll be conserving Focus to cast Aika's skill which completely negates spells (your own spells as well, though items bypass this effect), and Vyse's powerful non-elemental physical attacks will become your primary damage-dealers.

The game also takes advantage of its setting by having ship-to-ship battles occur throughout the story.  These unfold much differently, as there is only one ship on each side; however, things constantly change up throughout the battle, with turns regularly placing the enemy or player at a disadvantage and forcing the player to adapt to the situation on the fly.  The focus mechanic also remains here, requiring the player to be wise with gauge management in order to be able to heal themselves or land a devastating blow on the enemy when given the chance.

Aesthetically, Skies of Arcadia is emblematic of its era in many ways - it was that awkward era between the Nintendo 64's blocky low-polygon models and the high-resolution textures of the Playstation/Gamecube/Xbox era, with the Dreamcast meeting both halfway.  Characters are modeled and animated well, though the environments look rather blocky and drab with textures being copied repeatedly over very large visible areas (only compounded by the lack of distance fog) and very visible corners and sharp edges on many models.  Still, it is among the best-looking games of its era and especially the platform on which it was released; few 3D Dreamcast games hold up well today, but Skies of Arcadia's distinct visuals certainly lend it an edge there.  Disappointingly, however, the Gamecube re-release does not support Progressive Scan, which means it has less sharp picture than it potentially could.

The game's audio is also a bit of a mixed bag.  The music in the game is undeniably strong, with numerous orchestral tracks that lend a lot to the setting and tension of combat.  The sound design, however, is a bit sparse; characters have voice clips throughout battles and cutscenes, though they're mostly limited to short laughs or calling out the names of special moves, and several seem to have been put through some strange audio filters, lending them an awkward echo effect or making them excessively loud.  Sound effects are disappointingly few in number; aside from a few generic impact sounds, there's just not a lot for you to hear besides the music itself.

So we have solid (if not particularly well-aged) aesthetics, some clever gameplay twists, a strong setting and some inspired design throughout; almost all the makings of a solid RPG.  However, there is one significant flaw that prevents Skies of Arcadia from joining the ranks of other classics of the era in my book, and that is its overall pacing.  Combat in the game is pretty slow overall, with characters having to walk over to their enemy, get in position and then play an attack animation, which can get pretty drawn-out in normal encounters with 5 or more enemies at once on the field.  Attack animations get pretty repetitious too, with some fairly long spell and special moves playing out numerous times each battle and no way to skip them; while not quite as bad as something like Final Fantasy VIII, it does get pretty tedious when you're fighting so often and seeing the same animations so many times. Getting through a single dungeon can take upwards of three or four hours, a single boss fight can take 15-20 minutes, and airships battle can easily last for upwards of half an hour, which only becomes more frustrating when you're spending far more time waiting for an animation to finish than you spend actively inputting commands.  All in all, this was just a very strange design decision to make, especially as Rieko Kodama's earlier Phantasy Star games became iconic because of their streamlined design and, in 4's case, their considerably more fast-paced gameplay than most RPGs of their era.

It's a bit of a shame that hey went that route, because in the end, Skies of Arcadia is a game that knows exactly what it wants to be - a traditional RPG for the Dreamcast with just enough change-ups to the overall formula of the genre to keep itself distinct and memorable.  The imaginative setting, upbeat tone and enjoyable (if stock) characters and storyline make for a game with a lot of charm, but the slow pacing, weird balance and overly frequent battles ensure that only the most patient of gamers will be able to complete it. 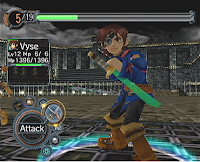 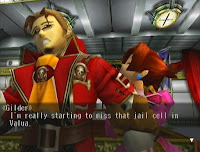 Developer: Overworks
Publisher: Sega
Platform: Sega Dreamcast, Nintendo Gamecube
Released: 2000, 2003
Recommended version: The Gamecube version of the game polishes up the visuals a bit, features some added content (including new sidequests and boss battles) and tweaks the gameplay to lower the encounter rate by a significant degree (with enemies giving more experience and money to compensate).  The VMU minigame Pinta Quest was not included and the audio quality is compressed to fit the whole game on a single disc (the original Dreamcast version shipped on two), but otherwise this is definitely the superior release.
Labels: ⭐⭐, 🎣, 2000, Full Reviews
Newer Post Older Post Home