Square Soft's first (and to date, only) game developed at their American branch clearly takes heavy inspiration from their earlier hit, Secret of Mana.  But does this game stand on its own, or is it just a pale imitation of its namesake? 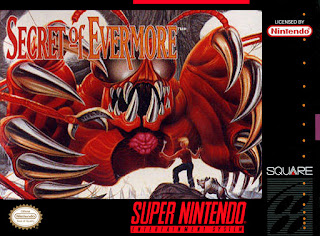 Secret of Evermore is one of Square's more divisive games of the SNES era; on one hand, it was their first game where they let an American development team take the reigns, which would give it a distinct style and sense of humor compared to their earlier efforts.  On the other, it attracted controversy for using a similar name to their earlier hit "Secret of Mana" while delivering a much different product in terms of style and arguably quality.  Then there was further controversy about this game being released in lieu of the "real" Secret of Mana sequel despite the fact that Square had never announced any plans to translate Seiken Densetsu 3 (and, considering the Super Nintendo was being phased out in favor of the Nintendo 64 and Square themselves were in the midst of moving development to Sony's new Playstation console, it's unlikely it would have been released in any case).

In any case, those who actually played Secret of Evermore found a product that, while different from Square's usual fare, delivered a distinct charm of its own.  The environments in Evermore definitely utilized a grittier and more realistic style than most Square games of the time, utilizing a darker palette overall and taking inspiration from real-life locales like the pyramids of Egypt, a Roman gladiatorial arena, European castles and a prehistoric valley full of dinosaurs, insects and man-eating plants.  Of course, they do work in fantastic elements as well, such as a futuristic space station and numerous giant boss creatures like a swamp monster, a magma creature and a series of robotic doppelgangers.

On the other hand, the more realistic style of the game's world was contrasted with the animations of its main character, which used a Looney Tunes-esque stretch-and-squash style of animation when he takes hits or uses certain weapons (such as being flung back several feet whenever he fires the bazooka weapon).  This ties in to the sense of humor prevalent throughout the game as well; Evermore is very self-aware about its archetypal story and characters, with the protagonist frequently making jokes about the sitaution (usually comparing them to fictional B-movies) and many characters throughout presenting ironic humor of their own (and even breaking the fourth wall on occasion).  While many of Square's other games had humor to them in spite of their darker elements and high-stakes stories, Evermore was a bit more overt about it, frequently reminding the player that this was supposed to be a fun game and not to take it too seriously.  (A mindset many of Square's other games and their fans could stand to take notes from, but that's neither here nor there!)

Also in contrast to the Square norm, Evermore's soundtrack is not the typical grandiose, orchestral soundtrack that punctuated many of their RPGs, but rather something more low-key and atmospheric.  Many areas are accompanied by the sounds of waves crashing or wind blowing, which added a lot to the game's atmosphere and made the world feel more alive and realistic than most RPGs of the time.  Of course, when the action picks up, the score does as well, delivering some moody tunes to accompany the action.  Jeremy and Julian Soule provided much of the sound work here, and would go on to become major contributing talent for many other high-profile games, the most famous among them probably being the Elder Scrolls series.

In terms of gameplay, Evermore definitely bears a strong resemblance to Secret of Mana, utilizing a real-time combat system that requires the player to recharge an attack meter between strikes in order to deal decent damage.  It even utilizes the familiar "command ring" interface for changing equipment, casting spells or checking the player's statistics.  However, it also feels more polished in some ways - the hit detection feels much more solid than in Mana, and the character AI is definitely improved, with far less instances of players getting hung up on scenery or repeatedly running into the same enemy's attacks and being killed, which makes the gameplay much more enjoyable overall.  One major drawback, however, is that the game does not feature multiplayer co-op; the player can control either character (the boy or his dog), but there is no option to let a second player jump in.  A pretty significant omission, especially as a major selling point of Mana was its ability to let up to three players battle their way through the game.

One feature that sets Evermore apart, however, is its Alchemy system.  Rather than simply operating off of "magic points", the player must collect and spend various items to cast spells a la the Ultima series.  For example, casting "Flash" (the basic fireball spell) requires one part Wax and two parts Oil.  These are frequently found throughout the game's environments (with the dog sniffing them out for the player while under AI control), but can also be acquired through the traditional RPG method of buying them in shops.  As in Mana, formulas level up the more they are used, but it can be a bit tedious to do this as you must not only keep your item stock up, but as the game goes on, you will end up having to cast spells dozens upon dozens of times to gain levels with them.  Simply ignoring them isn't an option, either - your standard weapons tend to do significantly greater damage, but there are a few bosses throughout the game that your weapons simply cannot reach, all but requiring you to rely on alchemy instead.  While it is de-emphasized in most other respects, a bit of the old-school RPG grind is all but required for the alchemy aspect of the game.

Another downside of the game is its somewhat unintuitive dungeon layout.  While Mana's dungeons were relatively linear for the most part, Evermore brings a lot of mazes.  Mazes which tend to be very samey-looking and require a lot of backtracking to navigate through, no less.  I suppose this was a bit of the North American RPG mindset; many old CRPGs featured samey-looking first person mazes that all but required the player to draw out maps, so one could argue that the same mindset was on display here.  Still, as JRPGs had largely moved beyond that by this time, it feels a little out of place here.

Anothe drawback to the game lies in its uneven difficulty.  The player's characters power up at a relatively quick pace, which tends to make them overconfident and want to neglect the alchemic system, especially when their normal weapons are doing so much more damage.  As something of an attempt to mitigate this, the game features more than a few "brick wall bosses" that prove to be extremely dangerous, draining the player's health at an alarming speed while requriing a lot of damage to bring down themselves.  The first of these is actually the game's very first boss, Thraxx, a towering behemoth that the player can't really hit without taking damage themselves (and, given their relatively low HP at the start of the game, makes surviving the battle a harrowing experience).  Another notorious example was Verminator, a rat-beast perched atop a shelf that constantly bombards the player with powerful alchemy.  Not only is he out of reach of most of your weapons, but you don't even have the courtesy of being able to backtrack once you've reached the area where he resides, meaning that if you don't have a backup save and enough Call Beads or powerful alchemic spells to defeat him, you may just have to restart the entire game.  A bit of questionable design for sure.  The game even humorously goes the complete opposite route in its final stretch, giving the player two extremely powerful Alchemic spells that make them virtually invincible and turn every one of their attacks into a fully-charged critical hit, allowing them to simply brute-force their way through the final gauntlet with no trouble.

Another point of contention for the game was its overall length.  Compared to many RPGs of the time (and especially Secret of Mana), Evermore is overall a rather short experience, lasting roughly 10-15 hours for a first playthrough.  While I'm not personally opposed to the game's length (as I've often said, I'd rather play a short game that's good throughout than a game which is 50 hours long just for the sake of being 50 hours long), I can see why fans of Square's usual lengthy, grandiose adventures would be a bit let down by it.

At the end of the day, Evermore is a flawed game, but it's also a humble one; its developers weren't bent on making a game to take the JRPG market by storm, but rather present a humble first effort that, were it successful, could have paved the way for more western-developed adventure titles from Square.  And while the game was a modest success with critics, its low sales and unpopularity among fans ultimately led to the development team's release from Square.  They would later form an independent studio named "Big Rain" (later rechristened "Craveyard Entertainment") and take another shot at making a western-flavored JRPG in Shadow Madness, but that game also failed to impress critics and fans and the studio folded shortly thereafter due to bankruptcy.  Still, while Evermore may not reach the heights of other Square games in terms of scale, ambition or replay value, its humility, quirky humor and unique charm make it worth a play. 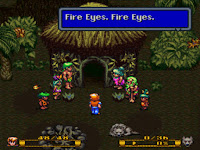 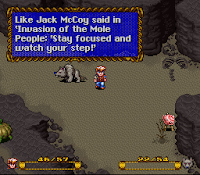