The Legend of Zelda: Twilight Princess

After a few experimental forays, Twilight Princess returns Zelda to a more traditional format.  But is this a welcome return to form, or just an indicator of a series growing stale? 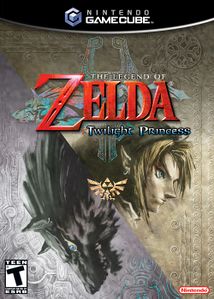 Wind Waker and Majora's Mask were two 3D Zelda titles that attempted to mix up the usual Zelda format; Majora's Mask with its time-based puzzles and ability to reset the in-game clock to revisit past events, and Wind Waker for its more open-ended gameplay that relied heavily on sailing across a vast ocean.  While both games were well-received by critics, fan reception was considerably more mixed, with some loving the games for their unique innovations and others criticizing them for the flaws that came with these new ideas.  Seemingly to address these critiques and return the series to a more traditional format in the vein of Link to the Past and Ocarina of Time, Twilight Princess' gameplay was considerably more linear and cinematic in style, pushing a new, darker aesthetic as well as a more complex storyline than the series norm.

Cinematically, Twilight Princess definitely succeeds.  The character animation and cutscenes are absolutely lavishly produced, with expressive and highly detailed character models pushing the story's emotional weight to great effect.  The visual style of the game is also reminiscent of Ocarina of Time's in some ways, with its exaggerated style and overall dark aesthetic, but the sharper visual capabilities of the Gamecube really allow it to come to life.  Environments now feel dynamic and alive, with numerous NPCs wandering about, frequent enemy encounters on the overworld and even some nice animated effects within the environments themselves - drifting clouds and aurora effects around bright objects to name just a couple.  Boss battles are also completed by some amazing setpieces that are truly massive in scale, with one boss in particular being fought atop a large, floating palace in the sky and with a storm steadily building in the background as the fight rages on.

Of course, nothing was lost in the fundamental aspects of the series either.  Zelda's dungeon designs are still impeccable, requiring some substantial thought to fully complete but never making the puzzles too inobvious or obtuse.  Boss battles are still creative puzzles in their own right, requiring the player to use their items in creative ways to strike at their weak points and make them vulnerable to a flurry of sword strikes.  And of course, the series' norm of hidden secrets is here in full force, with the game having a plethora of minigames, hidden rooms and obscure pathways for the player to traverse in search of a 100% completion rating.

But while the format of the game is largely traditional, the gameplay also does much to distinguish itself.  Horseback battles are now a feature of the game, seen in a few story scenes but mostly relegated to free-form overworld exploration.  Combat in the game as a whole is also considerably more polished, with much more crisp and responsive controls overall.  Link also has a plethora of new moves that can be earned throughout the game and triggered on command - from a dodge roll that allows him to quickly roll and strike an enemy from behind to a leaping spin to a technique called the "Mortal Draw" that allows him to quickly draw his sword and strike and enemy down in one smooth motion.

Another new feature is the ability for Link to become a wolf in order to traverse obstacles and fight enemies.  It ultimately does not see a lot of use, but it is an interesting new dimension to the gameplay.  Combat in wolf form is also frequent, though it lacks the same level of polish as other aspects of the game; Wolf Link's attacking controls feel rather loose overall, and the fact that the player has no control over him during a leap or charged multi-strike attack means that he can easily get caught on scenery or run straight into an enemy's attack.  The lack of range also means that some enemies (such as Armos statues) can also easily clip you when you move in for an attack, with the player having no ability to avoid damage.  This is not a huge concern in the stock game, but in Hero Mode on the Wii U version and especially in the Cave of Shadows bonus dungeon, it can become a problem.

The items Link acquires throughout the game were also seemingly designed to break way from fan expectations.  Getting past ice barriers, for example, would traditionally require a Fire Rod or fire arrows, but here you simply get a huge ball and chain and smash your way through.  The hook shot returns, but the player now gets two of them, allowing Link to zip from one handhold to another without touching the ground.  An old personal favorite does return, however - the Bomb Arrows, formerly exclusive to Link's Awakening, allow Link to deal a hefty blow to enemies or destroy obstacles from afar.  But in a strange twist, there is no direct equivalent to the Ocarina, nor any items that work off of a magic meter.

The Gamecube and Wii versions, released concurrently, do also feature some distinct differences.  The Wii version flips the entire game map from left to right, as well as making Link right-handed to accommodate the motion controls.  The Gamecube version retains the original map, but has a somewhat more limited interface; only two buttons can be mapped to equippable items.

The Wii U release features updated HD visuals, as well as some tweaks to the gameplay.  The gamepad can be used to play the game itself, check the map without the need to pause the game or simply switch items on the fly.  Link's sword can no longer collide with walls (making combat in tight spaces more manageable), all of the wallet upgrades can hold more Rupees, and there is a new Hero mode that doubles the damage Link takes, disables heart drops and flips the map to match the Wii version of the game.  Amiibo support is also included, with Link, Toon Link, Zelda and Gannondorf Amiibos from the Smash Brothers set being supported.

The deluxe edition of the game also comes packaged with a Wolf Link Amiibo, which unlocks an exclusive new dungeon called the Cave of Shadows; 40 floors of increasingly difficult trials for Wolf Link to overcome, with the ultimate reward being a wallet that holds up to 9,999 rupees.  It's ultimately rather superfluous, but it also enables some competition with other players, as well as saving the player's fastest time and amount of damage taken, giving the game a slight competitive aspect.

At the end of the day, while it does still have some hiccups, Twilight Princess is another fantastic entry in the Zelda franchise; its impeccable level design, fluid combat, imaginative setting, captivating storyline and well thought-out puzzles make it a joy to experience.  It may not break a lot of new ground for the series, but Twilight Princess is easily my favorite of the "traditional" 3D Zelda games.

Developer: Nintendo
Publisher: Nintendo
Platform: Gamecube, Wii, Wii U
Released: 2006, 2016
Recommended version: The Wii U version for sure.  The Amiibo support is ultimately superfluous, but this version makes substantial improvements to the gameplay to ensure a smoother experience, plus it includes both the flipped and unflipped game maps, each of which provides a substantially different feel to the overall game.