Originally pitched as a concept for Final Fantasy VII, and it shows with its dark themes and complex characters.  But does it overcome Final Fantasy VII's weaknesses and stand on its own, or is it just too flawed an experience? 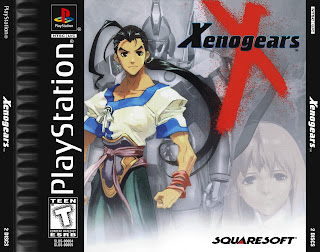 Xenogears is a highly divisive game even among die-hard Squaresoft fans, with some praising it for its complex storyline, dark themes and characters and attracting equal criticism for its lackluster gameplay, slow pacing and the fact that it simply feels unfinished.  It's not hard to see why in the latter case, either, as much of the game outside the story scenes feels a bit drab overall.  While many of the dungeons attempt to combine in some elements of platformers and puzzle solving in order to mix things up, the majority of them boil down to little more than lengthy, similar-looking mazes peppered with random encounters, seemingly designed to do little more than drain the player's resources and disorient them with frequent battles.  This is especially true for the Gear-based dungeons; as your Gears operate off of a limited fuel supply and cannot easily repair themselves until late in the game, running into too many encounters can leave you severely weakened when it comes time to face a boss.  And if you happened to save before the boss and have no means to recover your fuel and HP within easy reach, that can even mean having to return to an earlier save to try again.  Which means sitting through all of those long plot scenes again to get another shot.  Oh yes, this was still the era before cutscene skips became standard in games.

Probably the game's most notorious element, though, is its second disc.  The lack of development time hit this game hard, resulting in the second disc being little more than a long series of plot scenes peppered with the occasional boss fight.  Plot scenes which don't even feature characters interacting or even actual backgrounds most of the time; instead, you just have one of the three main characters sitting in a chair, summarizing the events whilst the occasional still frame pops up in the background to depict events which, on Disc 1, would have been a fully produced and staged cutscene.  It's a pretty egregious example of unfinished coding and design, and honestly just makes you feel like you're playing an unfinished beta version rather than something that was mass-produced and commercially released.

Combat in the game is also a mixed bag.  In addition to the usual complement of elemental spells, healing items and special moves, there is an interesting system in play that allows the player to chain together various combinations of weak, medium and strong attacks to create "Deathblows" - flashy animated combos that do large amounts of damage.  One can even chain together multiple deathblows in a single turn by storing up AP over several rounds and then selecting a special command to expend all of their AP at once and create a long, unbroken chain for massive damage; while generally not necessary to win a fight, it is quite satisfying to do so.  Gear combat, however, is comparatively bland; while it does still allow for Deathblows to be performed, they are much shorter, consisting of only two hits apiece and gaining power depending upon the number of turns passed between them, with the strongest (level 3) combos usually doing too little damage to justify waiting the three turns required for them.  Combat in the game also lacks balance in general, meaning that the strategy for each fight usually comes down to little more than repeatedly spamming your strongest attacks until your opponent goes down - a common problem for Square games at the time.  They attempt to mix this up with a few more puzzle-based battles, but these are a rare exception rather than the general rule.

So yes, Xenogears' overall design has some serious faults; lackluster dungeon design, combat and balance make for a game that can be rather boring at some times and very frustrating at others.  But Xenogears also makes it clear very quickly that this was really intended as more of a cinematic experience than a game.  Utilizing 2D sprites combined with polygonal 3D environments allows the game to have a more organic feel than the PS1 Final Fantasies which utilized static backgrounds, and the constant movement and interaction of NPCs and background elements makes the game's world feel much more dynamic and alive.  Cinematics are also very well staged and shot, lending a movie-like feel to many of the plot scenes in spite of the limited technology.

The well-produced visual experience is only further compounded by some very high quality FMVs to convey some story scenes, though they sadly are rather sparse overall and have some mediocre voice acting par for the era.  This, paired with a stellar soundtrack by the likes of Yasunori Mitsuda (of Chrono Trigger fame), certainly highlight Square's strongest suits of having an unforgettable audio/visual experience even if the underlying gameplay isn't all that impressive.

Of course, no anime-inspired work is complete without a narrative and storyline, and this is easily Xenogears' strongest element.  Replete with interesting twists, dark themes and even borrowing elements of Freudian and Jungian philosophy, Xenogears certainly takes the player on a wild (and frequently gruesome) ride.  The characters throughout also feel much more human and down-to-earth than many of Square's earlier efforts, with each being a flawed but interesting personality in their own way and having surprisingly natural exchanges of dialog throughout: talking about their lives, pasts and futures in the most candid of terms.  This is especially true in the early stages, though as the game's development got put on the fast track, the latter half of the game sees less and less of it occur.  Sadly, that is also where the story's stakes are at their highest and the character dynamics begin to change the most, so the absence of any (non-summarized) interactions between them only leaves the player wanting more.  The fact that the game's story also plays up a heavy, mysterious atmosphere for much of its runtime, only to drop all of the answers on the player in the game's climax (a 60+ hour journey) can also be quite frustrating.

At the end of the day, Xenogears is a very flawed, yet very ambitious project.  What's there is definitely memorable, but the fact that the game feels so unfinished, and the presence of numerous behind-the-scenes exposes revealing that the game was to be just one part of a six-part saga, just left almost everyone who played it wanting more.  Regardless, Xenogears is worth checking out at least once to see just how a grandiose project can go wrong because its publisher had no interest in giving it a chance.  There is also a silver lining in the fact that its developers went on to found Monolith Soft, a studio which brought us Xenosaga and Xenoblade Chronicles; while also not perfect, those games effectively showcase what a tremendous batch of talent Square let go to waste. 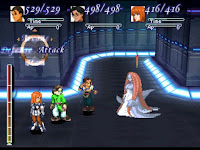