CRPGs had something of a renaissance in the 1990s, probably spurred on in no small part by console RPGs like Final Fantasy steadily transforming into a more cinematic, movie-like experience.  But does Planescape: Torment embrace all that is great about western RPGs, or is it just another forgettable one to be left by the wayside? 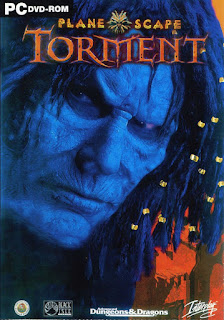 Black Isle is a studio well-known for any serious '90s gamer.  They consist of several people behind the original Fallout (with the other half splitting off to form another short-lived studio, Troika Games) and they ultimately developed several very well-received CRPGs including Fallout 2, the Icewind Dale games and of course this one, Planescape Torment.  Games which were all renowned for their sharp humor, imaginative writing and open-ended gameplay that gave the player near-total freedom of choice in completing most quests.

Planescape Torment is certainly no different in that regard.  While there is an overarching storyline (and quite a good one at that), it ultimately takes a backseat to letting the player carve out their own niche in the game's world.  There are hundreds of NPCs to interact with, countless quests to complete and over a million words of dialog to read, with all of it perfectly highlighting Black Isle's writing talent by immersing the player in a strange world full of bizarre (and frequently grotesque) sights.  The player is put in the role of a bizarre character - that of an amnesiac who is strangely unable to die - and is pretty much just given free reign to explore, filling in their character's past at their own pace and reacting to new situations however they choose.

There is also something to be said for Planescape: Torment's gameplay as a whole.  While it still utilizes the Infinity Engine from the Baldur's Gate and Icewind Dale series, it's easy to forget that this is a Dungeons and Dragons game.  Your character's alignment is not set in stone from the outset; you begin as True Neutral, but depending upon your actions throughout the game, it can easily shift in any direction.  Keeping promises will slowly shift your character's alignment toward Lawful, for example, while being violent will shift you toward Evil.  Some factions in the game require you to have a specific alignment, and joining them will make it extremely difficult to change your alignment back (such as joining the Chaosmen).  The player's class is also not fixed; they begin the game as a Fighter, but can also shift to a Thief or Mage at any time by speaking to specific NPCs, with each of the three available classes providing their respective abilities and having access to their own list of quests.

Also in stark contrast to other D&D games, combat is a fairly minimal part of the overall experience; while it does exist (and is not stripped down from earlier Infinity Engine games), the vast majority of the experience is a more cerebral one.  The overwhelming majority of the quests in the game are best solved with a more cerebral approach, which generally grants much greater rewards than simply brute-forcing one's way through them.

The player's unique attributes are also implemented into the overall game in numerous clever ways.  As the main character is essentially immortal, dying generally just sends them back to a predetermined area, and their ability to regenerate allows them to perform some rather bizarre feats; healing by drinking embalming fluid or stitching themselves back together, swapping out various body parts to unlock new memories or gain items, or even temporarily "dying" to gain access to a new area.

Of course, no RPG is complete without recruitable characters, and Planescape: Torment has several.  Each one has a story arc of their own, and several even have history with the player's past incarnations.  From Ignus the flame-obsessed mage to a remorseless specter of justice to a "rogue" machine named Nordom who is unsure of what to do with his newfound freedom, Torment's recruitable characters are just as well-defined and bizarre as any others in the game.  Seeing their stories to completion and digging up their pasts alongside your own also lends much to the experience; as with any good story, it's a thrill to see just how deep their arcs run.

Honestly, there isn't much more I can say of Torment without spoiling a lot of what makes it so unique; the true thrill of the experience is simply getting immersed in its world and making your way through on your own terms, and saying any more of its storyline or characters would dampen that considerably.  Gamers used to a more action-driven style may have some trouble adapting to it, but for those looking to get lost and immersed in a strange new universe and truly challenge the way they approach obstacles in video games, Planescape Torment offers one of the best experiences of its kind.