An action-adventure title for the Sega Genesis that obviously draws heavy inspiration from the Legend of Zelda franchise.  But was this a worthy alternative for Sega fans, or did they have to look elsewhere to get their fix? 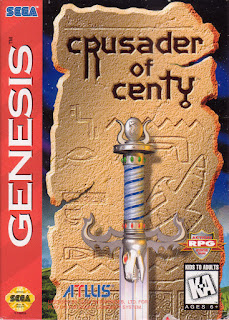 The Legend of Zelda was undeniably a game-changer at the time of its release; in an era where most games were strictly linear affairs or score-based single screen experiences, Zelda provided something much more expansive and dynamic.  The game's environment was enormous, enemies were plentiful and varied, and there were countless dungeons to explore, puzzles to solve and hidden secrets to find, lending the game plenty of replay value and longevity.  It success resulted in many imitators both on Nintendo platforms and their competitors, with Golden Axe Warrior on the Sega Master System and the Neutopia games on the Turbo-Grafx 16 being two of the more blatant examples.

Crusader of Centy (aka Ragnacenty or Soleil) is another attempt to copy the format, this time masterminded by a relatively obscure company called "NexTech" and published by cult classic publishing platform Atlus.  As one can imagine from the latter, the game only saw a limited release in most regions and as a result is now quite rare and expensive, meaning that most gamers probably wouldn't experience it without either emulation or shelling out a small fortune for a used copy.

This is rather unfortunate, as Crusader of Centy takes considerable strides to not only copy Zelda's overall style, but to introduce enough new elements to distinguish itself as well.  Centy features the overhead view and style of Zelda, but also incorporates some elements of platforming games - you'll often find yourself leaping from platform to platform over lava or watery terrain, dealing with winds that push you around (and off) of obstacles, and things like collapsing floors that give way to pits or damaging lava.

A unique mechanic for the game is in the player's weapon; while usable as a traditional sword, the player soon gets the ability to use it as a boomerang, throwing it to hit distant enemies or switches and having it fly back to them after it impacts.  Some powerups acquired later on allow it to gain further effects; it can ricochet off walls to gain extra distance and hit further targets, or even be manually steered by the player to navigate around obstacles.

While overall more limited than Zelda's array of weapons and items, Crusader of Centy also utilizes some clever change-ups to give it a unique style.  Throughout the game, the player recruits a number of animal friends, each of which gives differing abilities when equipped.  For example, equipping Inferno the lion will ignite the player's sword, causing it to burn enemies on contact, while equipping Flash the cheetah will cause the player's running speed to double, allowing them to quickly traverse areas.  Some animals' effects can also be combined together, either to bolster one ability or even unlock new ones entirely.  Combining Dodo and Inferno, for example, will cause thrown swords to attach to the enemy, continually burning them as they do so.

Centy effectively combines elements of Zelda with a slightly more action-platformer bent, but one thing it unfortunately lacks is also one of Zelda's most iconic elements.  Rather than being largely open-world and giving the player freedom to explore, Centy is a largely linear experience.  The game progresses from one area to the next, with new areas being unlocked as new items and abilities are acquired and little opportunity to backtrack and unlock new secrets and upgrades.  In fact, there's generally very little reason to revisit areas once they are cleared, which puts some pretty hard limits on the game's replay value.

While some of the puzzles can be tricky to figure out, Centy is also a rather easy game overall; enemies tend to do minimal damage for the most part, and bosses generally don't provide much of a threat once you've figured out their attack patterns.    This is especially true later in the game when you get ahold of some of the higher-tier animal friends; some combinations are extremely overpowered to the point of even being able to thrash bosses in a few seconds apiece.

The game's overall feel is also just plain odd at times, with events like the player travelling to heaven (and speaking to God through a door), going back in time briefly, and having a lot of strange dialog exchanges, replete with more than a few odd typos and nonsensical sentences.  There are frequently times when the story just plain doesn't make much sense, though the overall bizarreness of what's happening just left me wondering whether this was due to a spotty translation job or things being cut from the narrative, or a combination thereof.

Regardless, Crusader of Centy, while not the most dense in terms of narrative or the best game of its kind, provides an interesting and entertaining game experience.  The unique mechanics and blend of gameplay styles give it a distinct charm that makes it a worthwhile adventure for fans of these types of games.  The only real shame is that it never got much recognition due to its limited release, and that Nextech has made no attempts to rerelease or remake it in the years since. 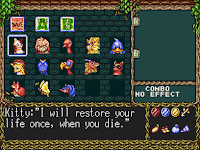 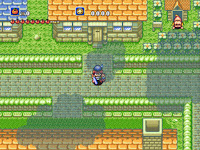