A tremendous crossover game that combines characters from numerous companies and franchises together into one title.  But does this game's enormous scale prove an asset, or does it just collapse under its own weight? 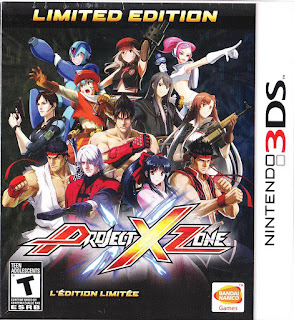 One of Namco's many long-running franchises is the Super Robot Taisen/Wars series, a crossover between countless different mecha anime and games that allowed the player to pick their favorite characters and battle their way through hordes of bad guys (some from the many crossed-over franchises, others original).  This was accompanied by an over-the-top battle system which allowed the player to control multiple characters at once, with a single button press launching a character into a lengthy animation that would hit the opponent multiple times and, with good timing, would allow your teams to chain together lengthy combos and super attacks for massive damage.  While nothing spectacular overall, their exaggerated style did prove amusing to a degree, and their random encounter driven, turn-based format generally made them enjoyable enough an experience to see through to the end.

Project X Zone is a spinoff of that franchise, carrying over many of its gameplay elements and crossing over numerous franchises (this time various Capcom, Namco and Sega franchises) but changing the core gameplay around to be more of a turn-based strategy RPG.  Rather than being based around simple random encounters as the player navigates a dungeon, the game's combat now operates off of a grid, with your units (comprised of a combination of three characters - one two-character team and a solo character) moving across the board, attacking and defending against enemy attacks in the same excessive style.

But with this change in format also comes the game's biggest stumbling block.  Namely that each battle in the game now takes so much longer to complete.  Rather than simply being about defeating single units and the occasional boss encounter and moving on to the next, the larger scale of the battles means that you'll be controlling nearly your entire supply of characters at a time and must now overcome a small army of encounters on each board, each of which can take multiple battle scenes to eliminate from play.  This means you'll be seeing the same few character animations over and over and over again within each fight, quickly reducing their novelty value to nil and just making them tedious to sit through instead.  Moreso when each battle can stretch out for upwards of forty minutes and the story scenes tend to give no indication of how close you are to completing it, instead seemingly just taking the chance to introduce yet more characters for you to control and more villains for them to fight against in the coming battles.

Not to say that the experience is all bad.  It certainly makes a good first impression with its prevalent sense of humor (including some very unlikely team-ups - Frank West of Dead Rising and Hsien-ko of Darkstalkers, for example), flashy style (including well-animated character cut-ins during super attacks) and even some pretty catchy background music from all of the various franchises involved.  However, the neverending buildup of characters, battlefields and expansive stages quickly makes one realize that too much of a good thing can, in fact, be very detrimental to the experience.  When you can get all of the fun of Project X Zone from a Youtube combo video and skip the 40+ hours of boring filler, it's really not a game I can recommend shelling out money for.