Class of Heroes bills itself as a classic first-person dungeon crawler, and they certainly put a lot of effort into making the experience feel like just that.  But does this title manage to distinguish itself from the rest in a long-running line of similar games, or does it just fade into the background immediately? 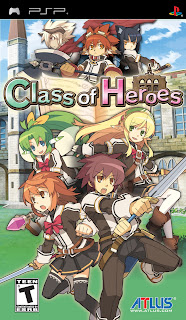 Back in the early to mid 1980s, technology didn't really allow for a lot in the way of storytelling and narrative in games; "Role Playing Games" instead were mostly reliant on providing a lengthy, complex and challenging gaming experience to hold the player's attention, with an emphasis on obscure puzzles, difficult enemy encounters and first-person dungeons that all but required the player to draw out their own maps on graph paper.  This style of gameplay has persisted in one form or another throughout the entire history of video games, and Class of Heroes fills that niche once again with an exacting homage to games like Wizardry in many fronts.  The player has a choice of ten races to create characters in (each with their own unique abilities, stat balance and affinity with other races) and numerous classes to work with as well - some relatively mundane (the usual fighter, mage, thief and cleric combinations) and others a bit more niche - Alchemists aid with item crafting by increasing item drops and being able to identify rare items, for example, whilst Psychicers can use any weapon from the back row, and Samurais can hit an entire row of enemies at the same time.  As with the early RPGs, any class can be taken up by any race, though there are obvious disadvantages to making weaker races take up the reigns as a physical fighter, or stronger races becoming a magic-using class.

The rest of the game is just as by-the-numbers in most respects.  There is very little in the way of an overall story or character narrative, with the only hints of it being in small quests given to you by various characters.  Quests themselves are mostly generic affairs, usually tasking the player to either find items, craft a specific item or defeat a specific foe in the depths of a given dungeon.  Not all of these are are as simple or straightforward as they appear, either; one of the earliest quests you get is to craft a slingshot out of "wood chips", which I didn't find any of until at least 3-4 dungeons into the game.  It's all a bit of a shame, really, as the game has some interesting lore behind its races and an overall cute and charming visual style for its characters, which just made me wish there was more of an emphasis on exploring the game's environment and interacting with its various races and cultures.

As per the standards of these games, Class of Heroes' main emphasis is in its dungeons - navigating mazes full of traps, puzzles and frequent encounters with enemies, some of which can be enormous in scale (with upwards of 15 enemies for the player to fight at a time).  However, this does also afford Class of Heroes a slightly interesting twist in comparison to most dungeon crawlers - while the dungeon maps themselves are not randomly generated, they are shuffled around randomly with each visit, which makes for a slightly different experience each time the player enters one.  Each dungeon floor is also symmetrical with screen-wrapping (exiting the edge of a map puts them on the opposite side), and when the player navigates their way through one, they unlock gates which quickly allow them access to the floor's exit on subsequent visits, which makes navigating already-cleared floors much faster.  This definitely helps when the player simply wants to get to another town or quickly access a floor they've already cleared to complete a quest.  Combat animations in the game also goes by relatively quickly, which makes mundane encounters a bit less of a slog.

However, despite its efforts to speed up the more commonplace and mundane elements of the game, Class of Heroes is a timesink by design - an exacting homage to old school dungeon crawlers like Wizardry and Might & Magic with very little emphasis on story and characters, instead making way for huge amounts of dungeon exploring, item crafting and battling monsters, with your only real motivation being to power up your forces, complete new dungeons and take on greater challenges.  If you're a big fan of that style of gameplay this should be right up your alley, but if you're not, the sheer grind that Class of Heroes has to offer will probably get tiresome quickly.