After two passable but mostly forgettable outings in Disgaea 3 and 4, the franchise returns to its original protagonists and setting for a new adventure.  But does this return to form redeem the series for more casual fans, or just push it further into irrelevance for all but its most die-hard followers? 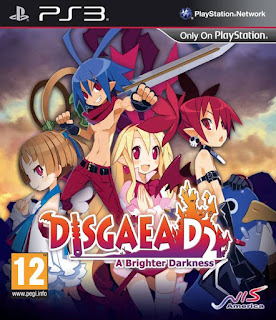 Nippon Ichi's Disgaea is a very love-it-or-hate-it franchise; you either love it for its deep gameplay, sharp sense of humor and surprisingly smart storytelling in spite of its cutesy visuals, or it just becomes a bore for the same reasons.  I personally still consider Disgaea 1 and 2, as well as the spinoff game Phantom Brave, to be some of my favorite strategy RPGs, but many of Nippon Ichi's other outings haven't had the same appeal for one reason or another; mostly, they just seem to overdo the grinding/randomized elements aspect of their design and quickly become tedious to play, rather than fun.

Perhaps as an attempt to address this and return the series to its roots for long-time fans, Disgaea D2 pares down many of the elements addressed in later Disgaea games, streamlines some other elements that have been around since the beginning, and adds in a few new ideas of its own in order to give it a distinct feel.  The most prominent of these is the "Cheat Shop", which allows the player to freely adjust the difficulty of the enemies and the amount of experience, money and mana they receive from battles.  This not only allows you to funnel less useful things (like money) into better level gains or mana boosts, but also to freely adjust enemy levels for more efficient leveling, especially in the post-game where money is all but useless.  This also allows the player to freely toggle on the Land of Carnage mode for high-level play (eliminating the need to farm randomly-appearing items in the Item World), as well as a new mode called "Rasetsu" which drastically increases enemies' stats (and yes, it can be stacked with Land of Carnage mode for even more madness).

One of the franchise's more controversial additions, the Magichange mechanic (wherein a monster transforms into a temporary weapon for a human character, with stats based on the monster's own) has also been removed from D2.  Instead of that, we get monster mounting, which allows any humanoid unit to ride a monster unit, adopting their movement range and using them as a shield of sorts.  All damage directed at a mounted unit is taken from the monster's HP, and when they die, only the monster is removed from the field, leaving the humanoid unit safe.  There is also no turn limit for using units like this (unlike Magichange) and it grants new attacks depending upon the monster type mounted.

Likability is another mechanic introduced in D2.  All units' relationship with others are ranked between 0 and 5 shearts, with things like successful team attacks and mid-battle conversations boosting it and harming/killing one another with attacks lowering it.  Characters with higher Likability have a higher chance to perform Team Attacks, as well as doing greater damage in team attacks, combos and mounted attacks.  Of course, being Disgaea, one can also spend Mana to boost relationships between characters by passing a bill at the Dark Council, but the price is prohibitively high until the postgame.

Some other mainstay elements of the franchise were also streamlined.  The interface is now much tighter (paring about 11 menu options down into roughly 5), the Item Warehouse and Backpack are amalgamated into one and expanded to 999 slots, and item world Innocents no longer need to be stored on items - they can be stored in the "Innocents Warehouse" after being subdued and used to populate items later.  The much-maligned "Rarity Number" on items has also been abolished, with items now simply coming in Common, Rare and Legendary variants and getting boosts when paired with other equipment of the same rarity level.  Diagonal throwing has also been simplified, simply allowing the player to pick any square within their throw range rather than having to time a button press as the cursor moves between two preset 90 degree angles.

Characters as a whole also have a greater degree of customization, with the ability to mix and match Evilities between classes (humanoids getting two while monsters get a total of three) and each generic class having three different variations to use.  Color palettes can also be freely assigned rather than having to unlock them later, and each character also has three voice sets to choose from, adding another layer to the player's immersion.

One of the lacking elements of Disgaeas 3 and 4, to me at least, were their storylines; their characters were rather forgetttable overall and the stories felt like less-interesting retreads of earlier entries in the series.  Thankfully, Disgaea D2 addresses this as well; the returning characters are as distinct and hilarious as ever, delivering some truly hilarious dialog in the story scenes and in-battle dialog snippets.  The story itself also regains Nippon Ichi's sly sense of humor, incorporating many bad and nonsensical fan fiction tropes ("long lost" family members, gender swapping, characters having previously unrevealed superpowers, etc) yet making them all work well to serve the game's witty tone.  That self-awareness and deprecating style of humor is something that I don't think too many, if any, other RPG companies could pull off well, but Nippon Ichi succeeds here.

The game is not totally without problems, though.  There were numerous issues with lockups in the game, as well as oddities like characters being reduced to 1 HP after a battle (even when at full health at the battle's end) and certain attack animations simply freezing on certain stages.  Many of these were addressed in a patch, but I still had the game lock up under certain conditions; mostly related to casting specific spells on specific stages.  Still, I only encountered this on a few scattered maps, none of which are particularly difficult to complete without the spells in question, so it wasn't a deal breaker.

The other major problem I had with the later Disgaea games is still in effect as well.  DLC for the game is at its scummiest, giving the player a grand total of nineteen new playable characters at a price of $3 each, totaling up to $7 more than the game itself cost brand new.  Worse, they had the audacity to tie trophies to each of these characters, meaning that completionists will not be able to get 100% completion on their trophy lists without shelling out for every last one of them.  A pretty bad thing considering that the franchise is geared toward that very demographic!

Some hiccups aside, Disgaea D2 is a worthy sequel, returning the franchise to its roots while also introducing enough fresh elements to keep the experience from being a thoughtless retread.  The newly polished presentation, ability to fully customize one's party members and reduction of many of the game's arbitrary random elements also add to the experience, creating a tighter game that appeals to more casual fans while reducing the sheer amount of save-scumming for die hard players.  Disgaea D2 stands as proof that a bit of streamlining and a return to one's roots can be a very beneficial thing for a franchise.