Bethesda's latest entry in the Fallout series exhumes a lot of the storytelling and bleak atmosphere in favor of a much larger emphasis on action.  But does that work in the game's favor, or does it just end up becoming another dime-a-dozen shooter once all is said and done? 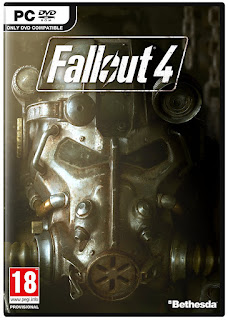 Fallout is a series with a long and convoluted history.  The first game was released on the PC in 1997 to the great acclaim of CRPG fans for its bleak atmosphere, wry sense of humor and for conveying a true sense of immersion.  Each quest in the game had multiple roads to completion, allowing the players to approach them guns-blazing, use a more stealthy approach or even resolve things through diplomacy (it was possible - and even viable - to complete the game without firing a single shot), and the choice therein gave the game some considerable replay value.  A sequel followed two years later, greatly expanding the amount of content therein but also introducing a large amount of bugs and numerous pop-culture references, which some fans found distracting.  Nevertheless, Fallout 2 was another highly-acclaimed game, and the sheer amount of things to do and the choice the player has in executing them makes it a game that holds up remarkably well even today.  Then came the mediocre-to-terrible spinoffs (Tactics, Brotherhood of Steel) born of Interplay's financial troubles.  These same troubles would lead to Fallout 3's cancellation and the license being sold to Bethesda Softworks, who produced their own Fallout 3 completely independent of Interplay and Black Isle's work.  While Bethesda's Fallout 3 was a decent attempt at moving the series into 3D, it also felt lacking in much of the choice, sly humor, atmosphere and polish that made the first two Fallout games so great.  A followup came two years later in Fallout: New Vegas, returning the reigns to its original developers and allowing them to create a sprawling, ambitious and almost completely open-ended adventure with multiple endings in much the same vein as the earliest games (and easily making it my favorite of the 3D Fallouts, as well as one of my favorite games of all time).  However, it failed to meet Bethesda's high standards and Obsidian was ousted from working on future Fallout games, leading to Fallout 4's development falling back to Bethesda's hands.

And that's where we are today.  Fallout 4 was Bethesda's second outing for the series, moving the setting to the Boston area and utilizing the power of current game systems to expand upon its gameplay, introducing new elements like a much more in-depth equipment crafting mode, town building and a new "radiant quest" system that, at least in theory, provides the player with randomized quest objectives to give each player a unique experience.  Which are all good ideas in theory, but for various reasons I'll get into further down, don't really work on the level they intended them to.

The combat in Fallout 4 is obviously where much of the development team's focus went, and it pays off on at least some level.  Battles in this game are much larger in scale than they ever were in Fallout 3 or New Vegas, with quests often encompassing dozens of enemies at a time shooting at you, lobbing grenades or just bum-rushing you (in the case of less-intelligent creatures).  Similarly, the game has frequent "legendary" enemies, which serve as boss battles of a sort - they're generally larger and much tougher than their counterparts, and defeating them usually gives you a pretty substantial experience reward and a piece of equipment or two.  They only get more over-the-top as your level increases, as well - from twenty-foot Mirelurk Queens to Irradiated Deathclaws to enormous hordes of super mutants and even a new type of robotic enemy called "Assaultrons" who attack with a vicious barrage of lasers.  Battles are frequently intense and require a lot of powering up to survive, particularly at high levels.  You really do have to make the best of your equipment and abilities to persist and make your way through the game, though it does frequently have the unfortunate effect of forcing you to stop and grind, or just avoid combat entirely, in order to complete many quests.  This overall makes the feel much less like a Fallout game and much more like a generic action title, which may satisfy many modern gamers, but probably won't appeal much to long-time series fans.

Combat aside, equipment crafting is easily the game's most interesting feature, allowing the player to collect various types of scrap materials in order to customize their weapons to suit their personal play style.  Almost every aspect of every type of weapon can be customized - barrels, stocks, expanded clips, sights and so on can be changed out or upgraded, with each having their upsides and downsides (usually sacrificing power for firing speed or accuracy, or vice versa).  This, paired with the relative scarcity of some ammunition types, also encourages the player to utilize and customize many types of weapons throughout the game, with even the low-quality junker weapons frequently used by Raiders are handy in some situations; while they are all but useless against heavily armored enemies, ammo for them is extremely plentiful, making them ideal for fighting off weaker foes.  Armor and clothing can be customized in similar fashion, utilizing scrap materials to tweak them in various ways (usually in the form of adding lining to make your character more resistant to some types of damage).

Disappointingly, however, you still can't make or find vehicles of any kind to travel the wasteland more quickly.  The closest the game comes to that is in the Power Armors, which appear frequently throughout the game and have interchangable and upgradable parts that allow things like short-distance flight, enhanced radiation resistance, and even custom paint-jobs.  There are just as many options here as there were for weapons and armor, though I was ultimately reluctant to use them much; all Power Armors run on fusion cores, which are a scarce resource in the game and drain too quickly to ultimately prove very useful.


Further adding to the heavy customization element is a town building system, wherein numerous areas throughout the wasteland can be cleared of enemies, then set up as "bases" of sorts - generators can be constructed, guard towers can be set up to provide defense, and various buildings, shops and other amenities can be built, complete with setting up trade routes between each outpost.  Occasionally said outposts also fall under attack by raiders and rely on the player to come save them in a timely manner, lest the outpost be ruined and most of its inhabitants killed.  This proves to be an entertaining distraction for a time, but the novelty quickly wears off once you realize that there simply isn't much point to it.  Were this used to power up your character or advance the storyline in some way, a la Actraiser or Dark Cloud, it would be worth doing, but they ultimately went down neither route - there's no substantial story benefit to town building, and you just don't earn enough benefits from constructing trade routes and defending outposts to really make it worth doing.  Not to mention your villagers have a bad habit of arming themselves with your stashed equipment and power armors if you leave them within easy reach, so it can be quite a nuisance as well.

Another large detriment to the game is the "radiant quest" system, where objectives, enemies and locations are randomized to a degree for each quest you're given.  Theoretically this would allow each player to have a unique experience, but with the way it's implemented, that's not really the case; there are only so many locations to visit, and with the minimal rewards and overall simplicity of the quests (usually just amounting to eliminating a particular enemy or retrieving an item from a location), it doesn't take long before the law of diminishing returns kicks in.  In fact, between that, the giant boss monsters, the sheer emphasis on powering up to survive battles and the randomized loot (using a Diablo-styled prefix and suffix system), it feels like they weren't even trying to make a proper Fallout game, but rather trying to shoehorn action-roguelike gameplay into the Fallout engine and make something more akin to the Borderlands franchise.

That aside, the major failing of Fallout 4 is just how dumbed down it feels in the storytelling department.  Rather than having a dense universe to explore full of interesting characters and creative lore, Fallout 4 doesn't seem engineered for anything beyond endless shoot-the-monster or collect-the-item quests.  This is nowhere more evident than in its dialog system, which no longer even allows the player to see the full text of the lines they'll be speaking; instead, we get the dumbed-down Mass Effect dialog wheel, simply having the player react in one of four ways to NPC's spoken lines (with a solid 90% of the choices having no tangible effect on the game whatsoever).  This overall makes the game's main storyline feel very railroaded and ultimately gives the player no real feeling of choice, save for choosing which of three factions to align themselves with.  Which itself feels like a flat attempt to recreate the main storyline of Fallout: New Vegas while carrying over none of its strongly-written characters or interesting quests.

Oh, and just to drive the Mass Effect comparison home, they also have character romances, with the player able to romance NPCs of either gender.  But as in the other game, the consistently wooden dialog, flat acting and lack of any interesting arc or history for any of the characters ends up making these scenes just as forced and cringe-worthy as you'd imagine.  And yes, Fallout 2 mostly played the character romances/sex scenes for humor, but even that at least gave you a slightly more tangible and rewarding reason to pursue them than an arbitrary digital trophy and the approval of a bunch of eleven-year-olds on Xbox Live.

At the end of the day, Fallout 4 is a hodgepodge of ideas that never really come together and form a cohesive whole; the developers obviously spent a lot of time incorporating elements of games like Diablo, Mass Effect, Minecraft and even a touch of Doom into the game, all the while forgetting to make them mesh together in any significant way. They also seemingly ignored the fact that the reason RPG gamers pick up a Fallout title is not to collect randomized loot and complete arbitrary quests just to "power up", but to follow an interesting storyline, uncover the lore of the universe and complete quests according to their own particular gameplay style.  Too shallow to be an immersive RPG or sim and too brain-dead to be a memorable action experience, Fallout 4 is a game without an identity of its own, save perhaps for the "I told you so" for what Fallout 1/2 fanboys claimed the franchise would become under Bethesda's watch.