The second remake of the Yakuza series, and as one would expect, it keeps the basic story beats of Yakuza 2 intact while adding a lot in terms of the series' trademark side content.  Rather than the straightforward experience system of the previous Kiwami, experience is now divided into five different types - Strength (Red), Agility (Blue), Spirit (Yellow), Technique (Green), and Charm (Purple) and different activities award differing amounts of each.  Almost everything you do awards varying amounts of points - eating at restaurants, battling enemies, taking part in minigames, filling out various objectives on the Completion List, or just winning major battles will all allow you to boost your stats or unlock new abilities.  Per series standards, there's certainly no shortage of side-endeavors to undertake, either - running a cabaret club, playing arcade games, taking on Bouncer Missions (fights against large groups of foes with no healing items allowed), darts, mahjong, hanafuda, poker, blackjack, and many more.  A side-story focusing on Majima in the year between the first Yakuza and the second is added too, providing even more content on top of the monstrous amount that's already there. 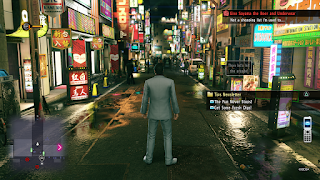