Based on the animated web series RWBY, Arrowfell looks pretty promising to any fan of the show, with some original music and animated scenes created just for the game, a story that's canonically part of the show's running plot, and a lot of characters both familiar and new to interact with.  Fittingly, you control all four characters of the titular team and swap between them on the fly, use their special abilities from the show and travel around Atlas and complete missions in maps with a Metroidvania bent.  As you finish missions you'll get skill points to unlock your base stats, and the odd upgrade to each character's Semblance, letting you reach areas you couldn't previously (for example, making Ruby's dash travel further).  Health is handled strangely, with a generic Energy bar that serves both to fuel your ranged attacks and absorb damage, with a secondary health meter in the form of hearts (which are only depleted when your energy is low/empty).  Each individual area you visit is very short, though the lack of a minimap throughout is a strange oversight, and combat is fairly one-note, with only the odd boss battle there to break up rooms of the same handful of enemies and tedious ambushes against more of the same - one would expect a bit more from a show known for its flashy action scenes, for sure.  A polished and playable, but very short and average experience overall; only the most die-hard fans of RWBY and WayForward need apply. 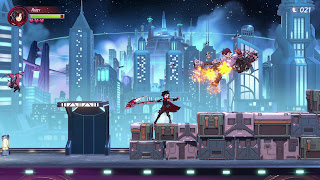