The first game based on the web series RWBY, which billed itself as an action game inspired by the likes of Devil May Cry, Kingdom Hearts and Mystic Heroes (one of many offshoots of the Warriors franchise).  It's a relatively straightforward action hack-and-slash experience, pitting you against waves of Grimm as you travel about the landscape completing various objectives (usually in the form of defending an objective or defeating waves of enemies).  Your health operates somewhat like the Halo games, with an Aura meter that regenerates over time and a health bar beneath that which gets depleted once your Aura is emptied.  Defeating foes earns experience points and levels, which can be spent to upgrade one's basic attacks, special moves or core stats, and the game supports co-op between up to four players.  Later DLC adds in a Horde Mode (wherein players try to hold out as long as possible against hordes of Grimm, purchasing defensive emplacements with money earned by defeating them) as well as all four members of Team JNPR as quite powerful bonus characters to play as.  A decent little beat-em-up style action game, though if you're not a fan of RWBY it's one you can safely pass on. 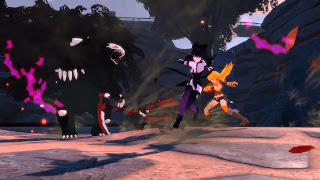