Mortal Kombat's popularity was in decline through most of the late '90s/early 2000s; while the games continued to sell well, they just seemed to lack the magic that made the series such a hit in the first place, with a lot of very forgettable characters being added, a clumsy transition to 3D and gimmicky additions like switching fighting styles mid-match.  Shaolin Monks served as a redemption for the series for many fans, attempting to create an actually good spinoff title after two botched attempts, as well as calling back to what made it such a fan favorite in the first place.  The game is loose retelling of Mortal Kombat II's story in the form of a beat-em-up starring Liu Kang and Kung Lao, and it plays quite well - the action is fast-paced and surprisingly fluid, allowing for a visceral and enjoyable experience.  One can also chain together combos, utilize each character's trademark special moves, use weapons and hazards in the environment to damage or kill enemies, and even perform fatalities with various button combinations, which earns bonus experience points.  Fittingly for a Mortal Kombat game, there are plenty of secrets to discover and goodies to unlock - concept art, music tracks, optional battles against several characters from the main series, and, after completing the game at least once with each character, Scorpion and Sub-Zero become playable characters as well.  It may not be a fighter, but Shaolin Monks is an enjoyable Mortal Kombat experience, and it's quite a bit of fun to bash monsters and ninjas with a friend in co-op mode. 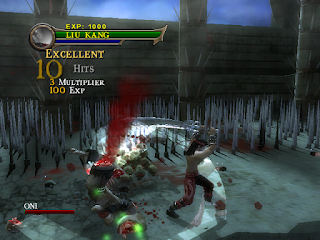