Square's Front Mission has been a pretty popular franchise in Japan since the days of the Super Famicom, but never attained anywhere near the same level of success in North America; it got releases on PS1, PS2 and DS, though sales ranged from just passable to abysmal (with the DS remake of 1 only selling a reported 60,000 copies worldwide).  I was surprised they'd make another attempt at localizing it after that, but Front Mission 1st Remake was released as a digital-only Switch exclusive.  It's a remake of the PS1 version of the original game, which includes a bonus campaign viewed from the opposite side of the war.  The core gameplay stays basically the same regardless of your story path, though - you command a squad of customizable mechs in turn-based tactical combat across various maps and terrain types.  Your mech's limbs take damage individually from the body, though you're only rendered inoperable if the body is destroyed - losing arms disables weapons, while having your legs disabled will stop you from moving until they're repaired.  There doesn't seem to be any way to target specific body parts though, so having limbs disabled or just straight crushing an opponent (or getitng crushed) comes down to luck of the roll.  Mecha fans may also be disappointed by the fact that there's not a particularly realistic damage model - "the only hit point that matters is the last one" so to speak.  It's got a pretty decent story and plenty of customization options for your mechs, but the overall gameplay is pretty ho-hum; nothing inherently wrong with it, but not much stands out either.  A game worth a try for RPG historians, or just those who never got a chance to check out the series before, but it doesn't have too much to offer to serious mech combat fans other than a different hemisphere's perspective on the genre in the timeframe of the '90s (compare this to say, Mechwarrior 2, which came out the same year as the original version for MS-DOS). 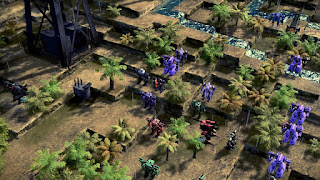