The debut game of Arkane Studios, who originally pitched it to Electronic Arts as a third entry in the Ultima Underworld franchise.  Electronic Arts was receptive to the idea, but demanded that provisions be made; provisions Arkane ultimately rejected, instead choosing to rebrand the game as a new IP inspired by the Underworld games.  But does it deserve to stand alongside its inspiration as a brilliantly-executed immersive sim, or is it one that got little attention for good reason? 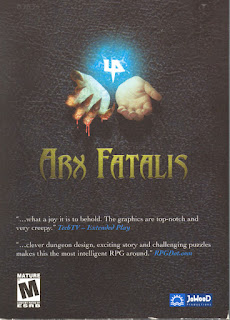 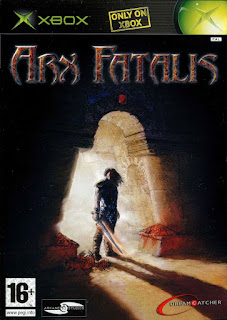 Arkane Studios is a pretty well-known and beloved name today; responsible for games like the Dishonored trilogy, 2017's Prey and Deathloop, they're praised by fans for their creative gameplay concepts and the storytelling within them.  They've also made no secret of their inspirations, citing classics like Ultima Underworld and System Shock as major inspirations for their games.  Arx Fatalis - a game they'd originally intended as a third entry to the Ultima Underworld series -  was their debut game in 2002 and was well-received by critics and fans, but not successful commercially.  This probably wasn't helped by the fact that it was released not long after Morrowind and Neverwinter Nights (released by powerhouse studios Bethesda and Bioware respectively).  However, the advent of digital distribution and Arkane's later successes saw several people revisit it, and it's built up a considerable following over the years.

Of course, as a huge fan of Ultima and having played several of Arkane's later efforts, I was eager to see how Arx Fatalis stood up to its inspirations.  It makes a good impression right away with its more streamlined skill/stat system (split into four stats and nine skills that each cover a number of traits) and an overall intuitive interface that uses a combination of keyboard keys and mouse features.  Tab to switch in and out of combat mode, right-click to switch to inventory interactions, click-and-drag to move and throw objects, and a number of one-press keys to open one's journal, stat screen or character menu.  Spellcasting draws inspiration from Underworld as well, using a runeword system, though unlike that game you have to draw out the shapes using your mouse while holding down the Control key and the left mouse button.  This is naturally rather clunky to do mid-battle, so you're given the ability to 'precast' up to 3 spells (5 on the XBox version) - essentially storing them for later activation at the press of a single key.  Money is weightless (in fact, weight doesn't factor in to your inventory capacity at all), though that's a good thing as it's much more important here than it was in the Underworld games.  The game also puts emphasis on a cooking system, letting you cook meat and bake bread and pies to serve as less expensive alternatives to healing potions.  As in Underworld you can also often bypass some obstacles like locked doors by picking the lock simply smashing them down, though there are minimum strength/skill requirements to do this, and some can't be bypassed at all.

Some differences do quickly show themselves, however.  Arx Fatalis lacks a dialog system, so there's not nearly as much focus on interacting with NPCs to solve puzzles and figure out what you need to do next.  The design is considerably more linear as well, with level layouts generally pushing you in one direction and not letting you go down some paths until certain, later story requirements are fulfilled.  That said, many story roadblocks do have multiple ways to approach them, and your choices will frequently play into the overall narrative; for example, choosing to attack the goblins who stole a troll totem will result in the goblins becoming hostile to you for the rest of the game and bar the item in question from actually being found, leaving a passage blocked for the remainder of the game, while analyzing some clues about the goblins' internal politics can lead to a more peaceful (and beneficial) solution.  One nice thing is that the consequences of your choices aren't always apparent right away but can come back to bite you later, so it's important to consider your options in every scenario.

Another improvement over its inspiration is the skill system - most skills in Ultima Underworld were fairly useless on closer examination, as there was always a way to get by without them (the Lockpicking skill, for example, was basically worthless as you could just bash down doors with your fists).  Here, skills are compressed into nine tiers, which cover numerous aspects of the gameplay.  For example, Technical covers both picking locks and disabling traps, Intuition helps to detect hidden objects, switches and traps, and also affects bartering prices in shops, while Object Knowledge allows you to poison weapons, repair equipment and identify items.  Some shortcomings still remain, though - there are very few ranged weapons (and finite ammo) in the game, so the Ranged Combat skill is largely useless.  Ethereal Link isn't very good either, as it just lets you determine an enemy's status as you fight them and causes your mana to regenerate slightly faster.  Still, homogenizing some less-useful skills with some that make sense to have is a step up from its inspiration.

Arx Fatalis is a nicely atmospheric and often creepy game, though the hammy voiceover (particularly from the goblins and trolls) does make some parts unintentionally humorous when they shouldn't be.  However, I find it falls short in terms of design in some very crippling ways.  There is no dialog system in the game whatsoever, which leaves the whole thing feeling very disconnected and impersonal, and shops are handled via an awkward system of placing or removing items in chests (with money changing hands automatically). The dungeon is a very straightforward and linear one for the most part, with few side-areas to explore (and attempting to stray into them early will just get you killed more often than not).  This also uncomfortably restricts you in terms of level growth, and can get you stuck when you encounter an obstacle you can't overcome when adhering to a particular playstyle, like a boss battle you have no choice but to win.  This seems a bit sloppy in terms of design, especially as earlier games like Deus Ex would almost always afford you a way to avoid combat entirely rather than forcing you into it.  Similarly, required difficult battles in Ultima Underworld would often come near the end, so you'd be much better prepared for them.

So, having played Arkane's first game, I can see why it didn't have a ton of mainstream appeal; after all, immersive sim games have always been notoriously unreliable in terms of selling well even today despite often being acclaimed by critics.  Arx is certainly a good attempt in some respects, streamlining the skill system of its inspirations and offering multiple solutions to many puzzles and a narrative that changes depending on your actions; however, its overall linear design, general impersonal feel and restricting you into certain playstyles are all definite detriments to the experience.  Still, Arkane had to start somewhere, and this isn't a bad foot to get off on - it just needed a bit more fine-tuning to live up to the legacy it clearly wanted to live up to.  They have since gotten their bearings and made considerably better (and much more successful) games in the years since, though. 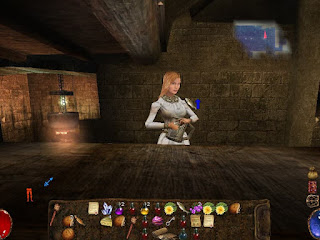 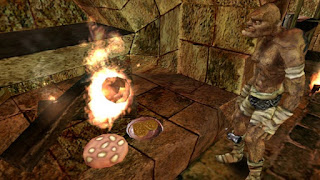 Developer: Arkane Studios
Publisher: JoWooD Productions, Arkane Studios
Platform: PC, XBox
Released: 2002, 2003
Recommended Version: The PC version has since been made open source, which allowed for a very nice fan patch called "Arx Liberatis" to be released, making it runnable on multiple platforms and in higher resolutions, as well as fixing several prominent bugs.  The Xbox version is a remarkably faithful port, though with a somewhat simplified interface for the controller layout.  One also has the option to activate "Arcade Magic" mode, which lets the player simply select spells from a list that they have the proper runes for and automatically precast them, rather than having to use the rune-drawing system.