The fifth game in the Dragon Quest series marked its first entry on a 16-bit platform, and fittingly, it attempted to change things up both narratively and in terms of design.  But does it prove to be another engrossing entry in a legendary franchise, or does this prove to be an unworthy Quest? 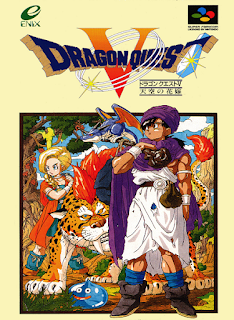 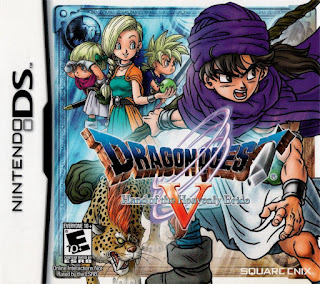 Dragon Quest is of course an extremely popular series in Japan, but didn't fare nearly as well in North America.  Despite its relative unpopularity overseas, though, it still attained enough of a following for Enix to localize all four entries on the Famicom, with the last coming as late as September 1992 - just over a year into the Super Nintendo's lifespan.  Dragon Quest V was the first not to be localized, reportedly due to programming issues that couldn't be resolved, and wouldn't be until many years later on the Nintendo DS; in the meantime, Enix mostly became known as a publisher of other company's games (mostly RPGs) until the early 2000s, when they would merge with Square to become the single biggest name in Japanese RPGs, Square Enix.

Dragon Quest V was one that intrigued me for a while; series creator Yuji Horii cited it as his favorite on at least one occasion, and it was said to turn a lot of the series' tropes upside-down in its story.  This is certainly evident right away as the story starts off with your main character as a young child, following his father around the world on a search for the Legendary Hero who will save the world.  The story is considerably more grounded and personal this time, centering on a lifelong trial for the protagonist and everyone who comes into his life - friendships and alliances are forged, he marries and has a child, learns the secrets of his family's past, and undergoes very personal hardships and tragedy before the game ends.  While not the first JRPG to introduce such a personal element to its storytelling, it certainly set a trend, seemingly inspiring some story beats and character building in later games like Final Fantasy VI and VII.  Having a multi-generational dynamic as part of its storytelling would also become a somewhat common trope in Japanese RPGs after this one, seen in games like Lunar, Suikoden, Harvest Moon and Fire Emblem, so Dragon Quest V seems to have been a pretty influential title in more ways than one.

Fitting its more personal and turbulent nature, the game's playable cast is also much larger than any prior game in the series.  Many allies join throughout the journey, coming and going as the story dictates.  As mentioned, your main character also marries during the game, and his wife becomes a playable character - all three choices (two in the original SFC version) have slightly different playstyles and equipment choices too, and you're locked out from recruiting the other two on that playthrough once you've made your choice.  In a new twist for the series, you can also recruit monsters to your side - after defeating them in battle, they have a chance to ask to join your party, at which point you can then add them to your wagon or drop them off at a "Monster Den" for potential later use.  This is a surprisingly full-featured addition, too - each monster has unique equipment choices, stats, learns unique sets of spells and even have widely varying max levels, though they may ignore your commands if their Wisdom is a very low amount (below 20).  Some prove to be rather gimmicky - the Goodybag monster is resistant to many elements and status effects and has quite high stats, though a low level limit of 7 and a capped Wisdom of 5 limit its long-term usefulness.  Slimes are another example; being the archetypal low-level mook enemy of the series, they have unimpressive stats and low growth per level, but surprisingly can equip some of strongest gear and, should one raise a Slime to level 99, they will learn one of the most powerful attack spells in the game.  Metal Slimes and their variants also make very powerful allies, though the odds of recruiting one are extremely low (1/1024 according to most guides), so it's highly unlikely you'll get one without copious amounts of farming.  They do still retain all of their usual resistances and weaknesses, too, so that can give you an edge or become a liability in certain scenarios.

So, there's a lot there in terms of storytelling, emotional impact and nitty-gritty party customization for the powergamers in the audience, but of course Dragon Quest V doesn't skimp on the side-content either.  The series mainstay of collecting Mini-Medals to trade for rare prizes persists in all versions, as does the casino where one can win medals to trade in for powerful items.  From the PS2 remake on, several more get added - a game-spanning quest called "The Knick-Knackatory" where you basically inherit a museum and put various artifacts from your adventures on display is probably the centerpiece there.  The Pachisi board game returns from Dragon Quest III as well, though under the name "Treasures n' Trapdoors", serving as both a means to acquire rare items as well as tweak your characters' stats with a hefty luck element involved.  A small bonus dungeon is added too, which ties the story back to Dragon Quest IV a bit and adds some powerful recruitable monsters to play with in the post-game.

So, having now played it, I can see why Dragon Quest V is considered a high point for the series.  While the core gameplay remains essentially unchanged from the 8-bit entries, it definitely upped the stakes in terms of storytelling and forging an emotional connection therein, giving the player character a very personal stake in the adventure and making its twists and turns that much more gripping.  Monster recruiting added an interesting if slightly underdeveloped new element, though it was relatively novel in RPGs of the time; though predated by Shin Megami Tensei and later taken to runaway success with Pokemon, it did also lay some of the groundwork for Dragon Quest Monsters, a game focused entirely on recruiting and training DQ's iconic critters which has become a fan-favorite franchise in its own right.  But beneath it all, Dragon Quest's high degree of polish, refinement and developer passion makes it shine, taking the player on an engrossing adventure that ranks among the best of its time period and a high standard which many other Japanese RPGs aspire to equal.  It's been criminally overlooked in the west for ages, but any serious fan of the genre should strongly consider giving it a playthrough. 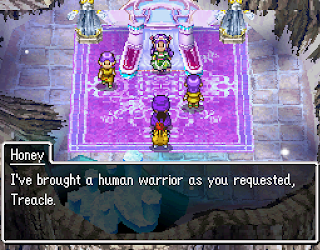 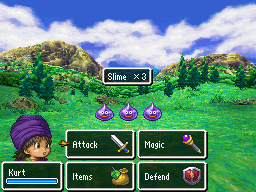 Developer: Chunsoft, ArtePiazza, Matrix Software
Publisher: Enix, Square Enix
Platform: Super Famicom, Playstation 2, Nintendo DS, Android, iOS
Released: 1992, 2004, 2009, 2015
Recommended Version: The later versions add a number of tweaks over the Super Famicom version, including some extra content (mentioned above), having a party size of four rather than three, and some extra items and weapons to utilize.  The only version to be released physically in the west was the Nintendo DS port, though the later Android and iOS ports are based on this version as well, which make it the most affordable way to play the game in English.