A bizarre collaboration for sure, Kingdom Battle crosses the Mario franchise over with Ubisoft's party game mainstays the Rabbids in a relatively unique take on turn-based tactical combat.  But does this crossover prove to be surprisingly good, or does it just make a mess of things like its titular characters are known for? 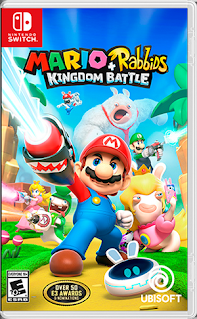 Mario of course is a name everyone knows, having been around since the early '80s and becoming the best selling video game franchise of all time through his sheer prevalence across just about every genre imaginable.  The Rabbids are also a relatively recent, though surprisingly popular, offshoot of the Rayman franchise, mostly known for starring in various party games; they became quite popular in the mid-2000s thanks to a large viral marketing campaign, showing them to be destructive, bumbling creatures causing chaos through goofy slapstick wherever they go.  Eventually they split away from the Rayman series entirely, becoming a popular name among younger gamers for Ubisoft, though not nearly as well-received among older players.

Seeing them cross over with a much bigger name like Mario was certainly a surprise (and initially met with more than a bit of derision from fans and gaming journalism outlets alike), but as development continued and it picked up a sizable positive reception at trade shows, it became apparent there was much more to this game than its gimmicky crossover.  Indeed, Mario + Rabbids was a big hit after it launched, winning several awards and going on to selling over 7.5 million units, which prompted development of a sequel that would be released in 2022.

Mario + Rabbids' gameplay is probably not what most people expected; in fact, it represents a completely new turn for Mario, as while he has had his share of RPG adaptations over the years, there's never been one that went for a turn-based tactical format.  One that certainly seems to take a few notes from the modern XCOM series, no less - Mario and his allies use low and high cover to their advantage and take on some very XCOM-like roles in the team.  Mario is a relatively well-balanced character who can bounce off of enemies with his jumps to deal damage and use Hero Sight to provide an automatic attack to an enemy moving within his line of sight; Rabbid Peach serves as a supporter who can heal nearby allies and put up a barrier to take reduced damage from attacks (and potentially draw fire from weaker teammates); Luigi functions as something of a sniper, focusing on getting to high ground and having the longest attack range, but relatively low health; and Rabbid Luigi goes in the opposite direction of Rabbid Peach and serves as something of a sapper, weakening enemies to make them less dangerous to his teammates.  Each battle has you form a squad of three characters (Mario and two others of your choice) and take on various challenges, from defeating all the enemies on the board to simply escaping a constantly regenerating wave of them by getting to a set point.

The XCOM similarities certainly don't stop there, though.  As you complete stages you'll earn coins to spend on new weapons, and skill points to spend on new abilities or upgrade your existing ones.  Weapons gradually unlock as the game progresses, though they primarily serve as side-grades rather than straight upgrades, often trading off different types of status effects to inflict and/or having a higher chance to activate said statuses against certain types of enemies.  There's quite a few of them, too - Bounce deals hefty damage and sends an enemy flying backwards and ricocheting off obstacles, potentially dealing even more damage from an "Out of Bounds" penalty if they fall out of the stage entirely.  Fire deals extra damage and causes them to run around randomly in a panic, honey causes them to be stuck in place and unable to move for a turn, and Ink blinds an enemy, making them able to move but not attack.  Character upgrades are equally diverse, from Rabbid Peach's aforementioned healing and shields to Mario's jump that can be used offensively (and to cure allies of status effects) to being able to summon an automated drone that will hone in on the targeted enemy until it's destroyed or gets close enough and detonates.  These can often be chained together in creative ways, too - for example, having Mario activate Hero Sight, jump on an enemy, then having another character attack with a weapon that has the Bounce property can cause him to fire as they're flung backwards, dealing devastating damage in a single turn.

Something relatively unique to the game (and unlike its XCOM inspirations) is Mario + Rabbids's movement system.  It is possible to simply walk between spaces on the grid, but a more economical (and fun) means of getting around is to spring off of your allies, propelling you several spaces and potentially to higher ledges you can't reach normally.  This gets a few twists of its own - as mentioned, Mario can chain-bounce off an ally and then an enemy to gain further distance and deal a bit of damage as he goes, while Luigi can chain-bounce off of two allies back-to-back to cover much more ground and potentially reach a good vantage point to snipe from.  Simply moving into the same tile as an enemy will also cause that character to slide into them, inflicting a free hit on them as they pass through (though enemies can do this to you as well).  Many stages also have other means of getting around, like pipes that will zip you quickly between various points on the field, potentially letting both you and enemies cover a lot of ground in a single turn.

In total, Mario + Rabbids has four worlds to venture through, each broken up into ten combat stages.  Between battles you're given a bit of free roaming to explore the landscape, solving puzzles finding some hidden paths that lead you to coins and hidden chests.  These can contain pieces of art, character models, records to play back the game's soundtrack, or even new weapons to use, so it's worth tracking down as many as you can (though you will have to backtrack a fair bit to find them all, as you'll gradually unlock more abilities to remove obstacles in your path as the game progresses).  Those looking for more of a challenge have hidden levels to discover as well as challenge stages that add new twists to the story maps, and there's even a DLC addon that adds another ten hours of gameplay and a new storyline separate from the main one.  Nintendo's famous amiibos can be used to unlock some decent (though not overwhelmingly powerful) weapons for a few of your characters, so while it's a nice bonus, it's by no means required to enjoy the game.

So, to both myself and millions of other fans, Mario + Rabbids proved to be a pleasant surprise indeed.  Rather than just another dopey party game with a bunch of infantile mutant rabbits, it's a surprisingly entertaining tactical combat experience, with quite a lot of nuance and depth you wouldn't expect from a game with such colorful, cartoony characters in it.  It keeps the tight mechanics and random chance element that makes games like XCOM continually gripping while adding its own twists to the formula, and - I'll just say it - a lot of the humor throughout is actually quite funny.  It's honestly pretty amusing seeing the Rabbids wreak havoc throughout the Mushroom Kingdom, turning a long-recognizable setting into something twisted and chaotic, and it's never overdone to the point of being grating.  It's certainly worthy of a sequel, and hell, maybe it'll even become a long-running franchise alongside other giants like the Mario Kart, Mario sports and platforming series if they keep the quality standard this high. 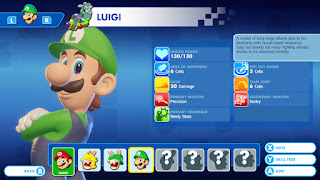 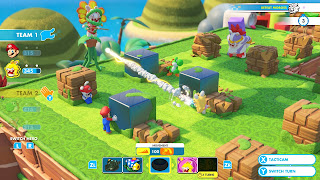