Tombs & Treasure is another relatively obscure game, and it slipped below my radar for a long while, largely because it barely even qualifies as an RPG; in fact, its original iteration on the PC-88 didn't at all.  It mostly serves as a point-and-click style adventure game, having you decipher clues, collect items and search for hidden passages around various mazelike tombs while uncovering the larger story.  The NES version adds in some (very) light RPG elements, though - every now and then you'll have to battle a monster in a very simple turn-based system, consisting of little more than trading blows until one of you drops.  That said, you do have to equip your weapon (by entering your inventory and Using it) or you'll fight barehanded and do far less damage, and you can run at any time, which restores you to full health so you can try again.  That said, the latter option can also save you from a game over, as the game is constructed in such a way to discourage sequence breaking - if you go somewhere you're not supposed to be yet, the enemies you face will be much tougher than you can handle; the only way to power up to beat them is to visit each area in order and defeat the enemies there, so it is an effective (if somewhat clumsy) means of showing the player the correct sequence of areas to visit.  Aside from that, the game does have some quite detailed visuals and good music for a 1988 release, and the guide included with the game isn't a blow-by-blow walkthrough, instead giving you a series of riddles to decipher.  So, if you enjoy these old adventure games that rely on untangling clues and a fair bit of trial-and-error to complete, you'll probably have some fun with Tombs & Treasure.  Those looking for a meatier RPG experience, however, should probably look elsewhere. 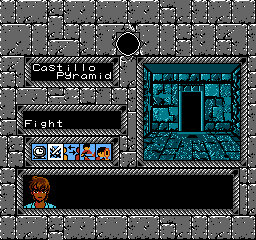