FTL's Dungeon Master was their breakout game, and indeed a groundbreaking title in quite a lot of ways.  Rather than being turn-based as many other first person dungeon crawlers of the era were, it operated in real time - roughly every second constituted a round, and any actions enemies and allies took were followed by a cooldown where they could take no further actions before the next round began.  Casting spells was handled not by typing in words or simply picking from a list, but by selecting a sequence of runes to create various effects; for example, clicking the rune for "Fire" would create light temporarily, while clicking the runes for Fire and Flight would create a fireball to strike the enemy in front of you.  Not just any combination works, though, so finding spell recipes on scrolls strewn throughout the dungeon is vital to discovering which ones will.  Taking other cues for realism, one must also have a light source to see in the dungeon, either via spells or lit torches (the latter of which gradually fade over time instead of abruptly cutting out), and the party has to eat and drink to sustain themselves.  One can also toss rocks, shurikens, et cetera at enemies or distant switches and pick them up again later for reuse; something pretty novel compared to most other games, where arrows and thrown weapons were one-use items.  The game is also among the first to exhume the traditional "experience level" system seen in so many other D&D inspired computer titles - instead, your skills are gradually improved through use, so fighting enemies at short range will make you better as a Fighter, ranged weapons (or bare hands) make you a stronger Ninja, and casting spells and brewing potions will gradually make you a stronger Priest or Mage.  Not only an amazing game for the period it was released, but a major inspiration for games like Eye of the Beholder and Ultima Underworld, the latter of which would become an incredibly influential title in its own right.

(Despite the similar name, it also has nothing to do with the 1985 film "The Dungeonmaster".) 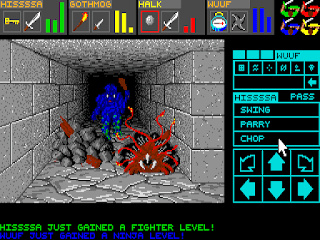