The Return of Ishtar

The direct sequel to the Tower of Druaga in the most literal sense - it starts exactly where that game ended, following Gilgamesh and Ki as they attempt to escape the tower.  Return of Ishtar is probably the very first co-op action RPG ever made, and I do mean co-op - having two players at the controls is required to play!  Thankfully, the game's action is considerably more straightforward than the puzzle-driven experience the first one provided, having Gilgamesh battle enemies in melee range (with touch combat similar to Hydlide or Ys) while Ishtar battles enemies at range with spells; however, if either player dies, it's a game over and you must spend a quarter to continue.  The layout of the dungeon is also considerably more complex; there are still 100 maps to go through, but now they're interweaved with multiple exits that can take you forward or back to previous rooms, so it's still a very long and involved process to complete.  Thankfully, you don't have to go through the whole thing in one long sitting - a password system keeps track of your progress through the dungeon.  It's also a fairly unbalanced asymmetrical experience - Gilgamesh's health drains when he attacks, making him completely dependent on Ki's healing to survive, while Ki gets all manner of ranged attack spells, supportive spells, buffers (including some that give Gil his only means to even harm certain types of enemies) and healing spells, and the camera only tracks her movement.  Basically, Player 2 just ends up being a glorified meatshield for Player 1, who dies in a single hit.  Worth a try for RPG historians as an interesting period piece that would lay the groundwork for significantly better co-op RPGs down the line, but there are many better such experiences to be had today. 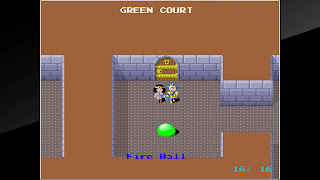