The Tower of Druaga

An enormous hit in Japanese arcades but a pretty big flop in North America and elsewhere, Tower of Druaga is a rare example of an arcade dungeon crawler, putting heavy focus on battling enemies and discovering hidden secrets that upgrade your character's abilities to be better prepared for later challenges.  You really do need them, too - you start off atrociously slow on your feet, and your only way of killing enemies is by holding out your sword and running into them, done by holding the button down and waiting nearly a full second for your character to lower his shield and ready his sword.  Keeping it ready all the time isn't an option either, as you need your shield up to block enemy projectiles.  There are a surprising number of powerups to find - weapon and shield upgrades, boots that make you move faster, a pickaxe to knock down walls, items to show invisible enemies and light up dark floors, and even draw your sword more quickly.  However, they're all hidden behind secrets, usually with fairly obscure unlock conditions, making this a game that encouraged players to share knowledge with one another and cooperate to reach the end (but only after hours of trial and error and putting many, many coins into the machine, of course).  It also spawned a sequel and a prequel in the following years, making this one of the very first Japanese RPG franchises.  Even if you've never played any of those, though, you may have seen traces of it in some other Namco-published games like Tales of Destiny (as a similarly-designed 100 floor bonus dungeon), Mr. Driller: Drill Land, Soul Calibur III or Baten Kaitos. 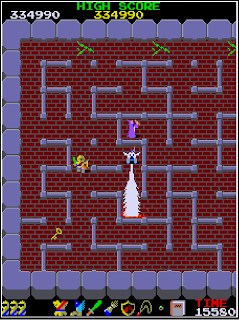