The Quest of Ki

The third game in the Babylonian Castle Saga franchise, the first to be made exclusively for a console and a prequel to its initial entry (the Tower of Druaga) that explains exactly how Ki got to the top of that tower; a logical expansion after the first and second games chronicled Gilgamesh's trip up the tower to save her and the second showed their escape.  Quest of Ki also marked another changeup in gameplay for the series - exhuming the RPG elements and, indeed, even disposing of combat entirely, Quest of Ki is a pretty simplistic puzzle-platformer, with the twist that you can continue to gain vertical height indefinitely as long as you hold down the jump button; however, if you hit your head on a ceiling, you'll drop straight down and be left in a vulnerable state until you've touched the ground for about a second, so careful control of your movements is required.  A few nods to the original puzzle-driven game still remain, though - you still have to collect a key to open the door and exit the stage, and you can collect powerups that aid you in various ways.  To name a few, there are candles that make ghosts visible, a sleep spell that temporarily renders some enemy types harmless, and wings that grant temporary flight (allowing you to 'jump' in midair).  Perhaps taking a couple of cues from Mario, you can also find hidden warps that skip you ahead several stages, though once you hit the bonus levels they'll start sending you backwards instead.  Overall, not one of the Famicom's more memorable platformers or puzzle-driven games, and as it's not even really an RPG, it only gets special mention on this site because of its status as a prequel to two of them.  If you're absolutely set on playing all the Babylonian Castle Saga games this is your first stop chronologically, but everyone else should probably pass it up in favor of something more enjoyable. 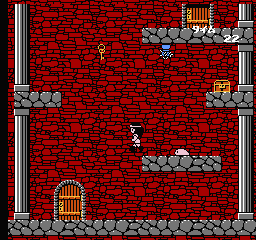