Metal Max is a franchise built around open-ended exploration and vehicles you can find and customize to aid you in battle, all set in a post-apocalyptic setting; sort of like Wasteland or Fallout but with JRPG-styled turn based combat.  Metal Max Xeno is only the second game in this franchise to be localized, and it does its best to try and fit in with a more modern school of design.  The minimal approach to story scenes and characterizations and the overall desolate world gives it a slight Fallout 3 vibe.  Its gameplay takes a few cues from games like New Vegas as well, with a lot of side-quests to undertake and incidental objectives called "miniquests" that give you bonus experience for doing even mundane things - collecting a certain number of an item, customizing your tank for the first time, finding new records for the jukebox back at your base, and so forth.  Switching between combat and exploration is pretty seamless - instead of having a separate combat screen, enemies draw a (literal) line of sight to you, and if you fail to move out of range before the gauge fills completely, you move a turn-based engagement; however, you can still move about freely in the time between your turns, allowing you to position yourself behind cover to avoid attacks or flee combat before you take too much damage, and once you defeat a foe, you move straight back into exploring.  Weapons also have ranges now, covering a blast radii or cone-shaped areas of effect, allowing you to hit multiple enemies at at a time with well placed shots.  Per previous games, there is a pretty heavy focus on collecting parts to build new weapons, engines and armor plating for your tank, and extras can be sold for a good bit of cash; far more than you get from battle.  It still hits some common pratfalls for the series, though - as you travel about you'll frequently encounter boss-tier monsters whom you can defeat for large bounties, but they're often far, far beyond what you can handle at first, necessitating that you avoid them and come back later (with no indication of how much later - you don't ever get to see how much HP an enemy has).  The overall bleak tone is also a detriment to a series which, up to this point, was known for its oddball humor; now the whole world is one big desert with almost nobody in it, making the whole thing feel pretty drab and lifeless, and you don't get oddball enemies like a giant subterranean VW beetle anymore - just a lot of repetitious tanks and mechs.  Metal Max Xeno tries to be something more akin to the modern Fallouts, but in doing so loses much of its own identity.  More damningly, it's missing that all-important satisfying gameplay flow, sense of freedom and subtle storytelling that make good open world RPGs so compelling. 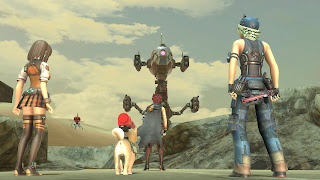