A game based on the popular anime series from the '90s, and the only RPG tie-in it received.  Being released on a platform with so many other RPGs (localized and not), it naturally attracted a fair bit of interest from both Sailor Moon fans and RPG players, which led to it getting a fan translation in 1999 (and another, higher-quality effort twenty years later).  It's definitely one made for the die-hard fans, too - many of the show's weekly monsters return as foes (both normal enemies and boss battles), the plot makes frequent references to specific events in the series, and all nine of the Sailor Scouts are playable throughout the story, retaining all of their special moves and even having some digitized voice clips to accompany the action.  License aside, it's fairly standard RPG fare overall with random encounters, turn-based combat and using use money to purchase items and stat boosting accessories.  It does have some nice nods to the show, though - characters can combine special moves together to create more powerful effects, including some they couldn't individually (stat buffs, full heals, etc).  A decent if not especially amazing game, but if you're a big Sailor Moon fan, go ahead and bump it up another half-star. 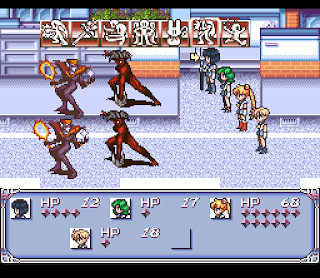