Ultima V was a game of considerable prestige in its day, serving as a shining milestone for the genre in terms of design and storytelling, and it still holds up today as one of the finest RPGs ever made. I myself even went so far as to declare it the best RPG of the 1980's, and have included it on my personal all-time favorite games list as well - not a decision I made lightly as I've been gaming for well over three decades now.  The NES version of Ultima V, on the other hand, is a downright disgraceful adaptation.  Rather than attempting to replicate the gameplay of the original game while making some accommodations for the hardware and controller (as the Ultima 3 and 4 console ports did, to considerable success), it instead attempts gameplay more akin to Ultima 6's simulation-based design.  The NES was clearly not well-suited to this task, as the UI is unbearably sluggish and every action you take is accompanied by a long delay; even walking around the map is excruciatingly slow, to say nothing of managing one's inventory, searching the environment, taking part in combat or even just moving the cursor from space to space. Case in point, using an item from your inventory - something that would take about two seconds in the original - can now take upwards of ten, as you have to open your inventory, move the cursor to the item, put it in one of your character's hands, exit the menu, press the A button, then select the item in your hand to use it.  (And that's assuming you're not trying to cast a spell from your spellbook, which brings up another menu to scroll through.)  Owing to space limitations on the cartridge Britannia is much smaller and virtually unrecognizable in design, with less towns, greatly simplified dungeons, far fewer NPCs to interact with and only a scant few lines of dialog when you do - a far cry from the original's dense world and rich character interactions that immersed you in the experience.  The game is passable visually though far from impressive for a 1993 NES game, but the audio design is wretched, with virtually no sound effects and one constantly looping twenty-five second track (recycled from Runes of Virtue on the Game Boy) playing throughout the entire game, ensuring you'll get sick of it very quickly.  Basically, an ill-conceived experiment on every front that is just no fun to play, and I can't even blame this total misfire of design on a third party as Origin themselves developed it; you'd hope they of all people would know how to handle their flagship IP.  So, do yourself a big favor - play one of the computer versions instead and leave this stink-bomb collecting dust on shelves in secondhand game shops, where it will share company with similarly late-to-the-party, overpriced and terrible NES games like Cliffhanger, Wayne's World and Swamp Thing for all time. 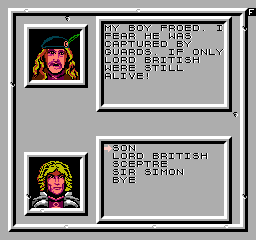