The Nintendo 64 was a platform with a serious shortage of RPGs, especially in light of it following in the footsteps of the Super Nintendo, which had so many brilliant examples of the genre that are still regarded as classics today.  Nintendo had planned a new approach to Mario in the realm of RPGs, but as Squaresoft declined to work with them again in favor of developing Final Fantasy VII on the Playstation, the task instead fell to Intelligent Systems.  But does this new approach to a Mario RPG have enough charm to appeal to die-hard RPG fans, or does Paper Mario fall as flat as its namesake? 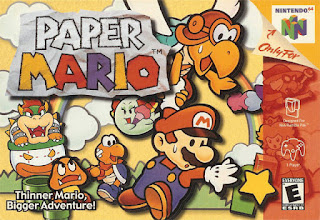 The Nintendo 64 is the strange middle child of Nintendo's console lineup; choosing to stick with cartridges in an era when optical discs were fast becoming the new standard, as well as utilizing 64-bit architecture that was difficult to program for, alienated many third-party developers from working on it.  Even Nintendo seemingly had misgivings about the limitations of cartridges, as they quickly made plans to develop a disk drive addon for the Nintendo 64; however, ongoing delays led to said peripheral only being released in the system's twilight days and only available via mail order in Japan, making it a significant financial and PR failure for the company.  As a result of this, many games that were originally planned for the Disk Drive peripheral were either reworked to use base hardware (Kirby 64, Ocarina of Time), ported to other platforms (Dragon Quest VII), or ultimately cancelled entirely (Snatcher, Mother 3).

Paper Mario was one of many games planned for the 64DD platform, though as a result of its failure, it was reworked into a cartridge game and became one of the last major releases for the system.  It was also originally developed under the title of "Super Mario RPG 2", though they later changed that as it bore little resemblance to the original Super Mario RPG in terms of design and aesthetic.  Indeed, rather than the prerendered CGI style Mario RPG had used, Paper Mario draws more inspiration from western cartoons and Parappa the Rapper on the Playstation, having soft-edged 2D sprites on three-dimensional backdrops that give the game the look of a pop-up book.  The game plays with this throughout as well, with characters visibly rotating and falling flat in 3D space and switches causing the scenery to dynamically shift and reassemble into new shapes - something Playstation RPGs with pre-rendered backgrounds weren't able to do, and it's quite fun to watch whenever it occurs.

Paper Mario's core gameplay is familiar if you've played Mario RPG beforehand, retaining its minigame-based elements in combat.  Well-timed button presses cause your attacks to deal extra damage and reduce damage from enemy attacks, and special moves often come with unique minigames of their own - pressing the stick to the left and releasing once a bar fills, mashing the A button to fill a meter, and timed button presses.  Some new elements do show themselves, though - the player can now gain an advantage in battle by landing a hit on the enemy before the fight begins, and the enemy can do the same to them, necessitating that they stay vigilant.  There is also significantly less of a party dynamic here - though you get multiple sidekick characters throughout the adventure, used both in combat and to solve puzzles outside of it, only one can be active at a time.  Enemies don't actively target them, either - only Mario - and if an ally takes damage they'll be incapacitated for one or more turns depending on how much 'damage' they took.  SMRPG also had relatively low HP and MP totals signifying its lower-stakes, kid-friendly design, and Paper Mario takes this even further, with your basic attacks doing only one point of damage (two with a timed hit) and generally pretty low HP totals for Mario and his enemies; the absolute maximum being 99.  On the other hand, this does give you a greater expectation of how your attacks can do, and even one or two points of Defense can be a serious hurdle to overcome.

Something that Paper Mario does quite well - possibly better than any other Eastern RPG before it - is giving you free reign to customize your character's abilities.  Each time you gain 100 Star Points from battles, you're given the option to improve one of your three core stats - HP, FP and Badge Points.  HP and FP are fairly self-explanatory, but Badge Points allow you to equip Badges that allow you to customize Mario in a wide variety of ways.  Boosting your base Attack and Defense; granting all manner of new special moves that can rack up the damage (hitting all enemies at once, repeatedly attacking one enemy until you miss a timed press) or inflict status effects; using multiple items per turn at an FP cost; searching out hidden items on a particular screen; or even just changing the sound effects Mario's attacks make in combat.  This affords beginners quite a few ways to give themselves an edge against tougher enemies, while more skilled players can put few levels into HP (or even none at all) and instead just focus on utilizing effective item/special move/badge loadouts to avoid damage and decimate their enemies.

Taking note of the fact that RPGs were becoming less about the main story and more about the journey you take through a virtual world, Paper Mario certainly doesn't skimp on its side content, either.  There are plenty of hidden secrets to discover, side missions to complete, optional minigames to check out, and even a couple of challenging optional battles you can undertake if you really feel confident in your skills.  It may not be as substantial as some of the Playstation Final Fantasies, but the amount of content Paper Mario provides is certainly nothing to sneeze at, especially for a game on the infamously space-limited Nintendo 64.

So, all told, is Paper Mario a worthy successor to Square's famous fusion of Mario's platforming and their own high-quality RPG design?  Well, while it doesn't quite have the same feel and charm of Mario RPG, I still found quite a lot to like in Paper Mario.  The quirky humor, creative presentation and heavy customization make it a game that appeals to both younger gamers and more seasoned ones, and Intelligent Systems - mostly known to this point for turn-based strategy games and RPGs - put their skills to good use here, making a game with familiar core design but some clever ideas that build on them in fine form.  Having more visual feedback on all of your special moves is a welcome improvement as well, making some special moves that were difficult to get the feel for (Geno's Beams, spinning the D-pad for Bowser's moves, the bloody 100 Super Jumps challenge) much easier to pull off.  All in all, I'd call it a fine successor, and easily the Nintendo 64's best RPG. 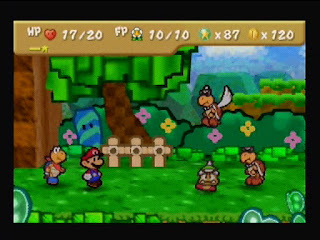 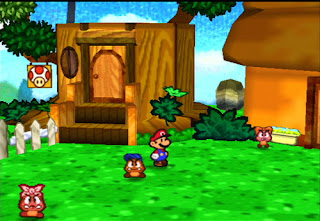