X-COM: Terror from the Deep

The original X-COM game was very favorably received in its time, and it remains a classic among fans of turn-based tactical combat and DOS games alike.  So naturally, a sequel was inevitable.  However, the team was given only six months to make and release it, so the result was... compromised, to say the least.  Fans were none too thrilled to shell out full prince for what they believed to be a sequel, but what was essentially an expansion pack; the brunt of the game now takes place mostly underwater in Earth's oceans, and the overall gameplay just feels like a reskin and slight retool of nearly every element from the original rather than adding anything truly new.  The difficulty is another unfortunate turn - owing to a bug in the original game that reset the difficulty to the lowest level after completing a mission, fans complained that UFO Defense was too easy.  So, for TFtD, they really went all-out - the easiest setting here is harder than the hardest one in that game, the tech tree is made much more complex (often requiring you to pursue several 'lines' of tech just to get a desperately needed new weapon or piece of armor), and enemies become absurdly cheap, often tucking themselves away in 1x1 rooms and just waiting for your men to open the door so they can snap off a reaction shot and kill them instantly.  Varying up your tactics becomes important too, as many enemy types are resistant or even completely immune to certain weapons; Lobster-men are a notorious example, shrugging off nearly all weapons save for the drill (which can only be used in melee range).  It does at least have a bit more visual polish than the original including a couple of FMV cutscenes to bookend the story, and the engine runs more smoothly save on the largest of maps, but even at a cheap asking price on digital platforms you can't help but feel a bit cheated as you play it. 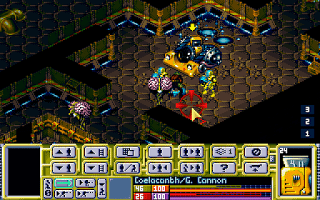