With Ghost of Tsushima, Sucker Punch tries their hand at a next-gen open-world experience, blending elements of stealth, sword combat, character customization and cinematic storytelling together.  But does it all come together and become a quality experience, or will it soon vanish like a ghost into obscurity? 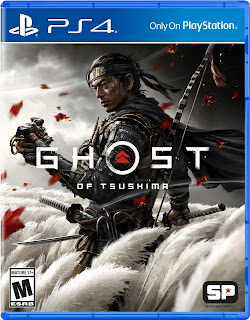 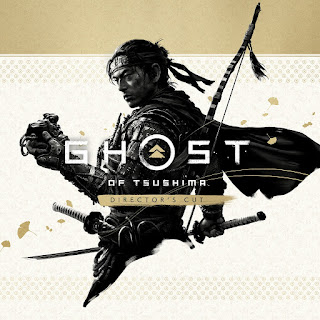 Sucker Punch isn't the biggest name associated with Sony, but they're a well-known one nonetheless. They've created a number of creative and original IPs in their time, beginning with Rocket; Robot on Wheels for the Nintendo 64 before moving on to create the Sly Cooper and Infamous franchises, both of which became strong sellers on the Playstation consoles. Ghost of Tsushima was their first new IP in nearly a decade, working some elements of their older games into a tale based on the first Mongol invasion of Japan.

All told, though, I was pleasantly surprised with Ghost of Tsushima.  It's a fine open-world game that overcomes several common shortcomings of the genre, and really highlights how fluid movement and strong action are absolutely essential in games like this - if major components of the experience aren't fun or are overly monotonous, it's really going to drag the game down fast.  The exploration element is consistently rewarding, with a surprisingly meaty amount of story content and few missions that feel like drab filler.  It's a very well-produced and gorgeous-looking experience too, flawlessly capturing the cinematic elements of its inspirations and making its game world - essentially a lot of wide open space - visually captivating with its use of bold color, negative space and wind moving around plantlife and clothing making it feel more alive and immersive.  Even the subtle visual cues are quite clever - the weather becomes more cloudy/stormy the more you rely on stealth attacks and other underhanded tactics (a subtle reference to the real-life Mongolian invasion being thwarted by a devastating typhoon - storms are also a recurring motif in the game), and areas with characters in need of help are indicated with smokestacks, letting you find them from long distances even without a quest marker.  A lot of people consider Horizon Zero Dawn to be the Playstation 4/5's answer to Breath of the Wild, but Ghost of Tsushima fits the bill much better in my book, taking hints from its freeform, creativity-inspiring design and showing an impressive level of polish that gives any of Nintendo's high-profile releases a run for their money.  An excellent experience and one that I strongly recommend. 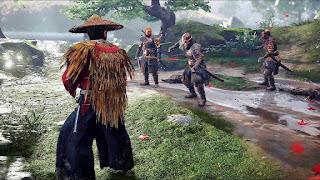 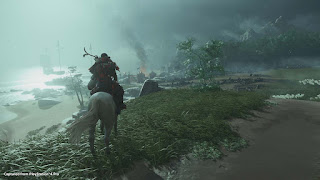