Not to be confused with the similarly-named trilogy of NES action-platformer games, Wizards & Warriors on PC is a game by David W. Bradley, who made his name working on Wizardry 5, 6 and 7.  During 8's protracted development, however, he had a falling out with Sir-Tech and left the company, enjoying a brief stint with Origin Systems (and releasing Cybermage: Darklight Awakening) before founding his own company, Heuristic Park.  Wizards & Warriors is seemingly his attempt to carry on in the tradition of the Wizardry series - a traditional dungeon crawling experience with multiple races, the four basic RPG job classes (Cleric, Wizard, Thief and Fighter) that can eventually upgrade into powerful 'prestige classes', and plenty of randomized loot and respawning monsters to fight, but gameplay-wise it's changed up a fair bit from its inspiration.  In fact, it actually plays a bit closer to Might and Magic 6-8 than any of the classic Wizardries, operating in real-time and with a first-person, full-3D viewpoint, though everything you do is still governed by dice rolls.  It's a very awkwardly balanced experience, too - enemy spawns seem to be highly random, often appearing only one or two at a time or dropping huge groups on you with no forewarning whatsoever, there's huge and sudden leaps in difficulty even within a single dungeon, leveling takes ages as quests and monsters give a piddly amount of experience each, stat gains from levels are randomized (which can put you at a serious disadvantage later on), and ranged weapons and "diplomacy skills" have no practical use that I could find.  Seemingly taking some cues from Daggerfall, you can also undertake semi-randomized quests at pubs and guilds and purchase horses to ride for slightly more movement speed, though the latter is largely a waste of money - you don't go much faster than you do on foot, and you can easily outrun nearly every monster in the game without a horse anyway.  Basically, Wizards & Warriors is a game that might have garnered a bit of a following had it come out in the early '90s, but by the year 2000 its rigid design sensibilities and general lack of polish made it look seriously dated compared to the likes of competing franchises like Baldur's Gate, Might and Magic, Deus Ex and Diablo.  Wizardry 8's release, despite being over a year after W&W's, only further doomed it to obscurity, as it married classic dungeon crawling and new elements together in a fan pleasing conclusion to the series.  Heuristic Park would take one more crack at an old-style dungeon crawl with 2005's Dungeon Lords, but it being released in a very rough, unfinished state led to their downfall and the closure of David W. Bradley's career as a game developer. 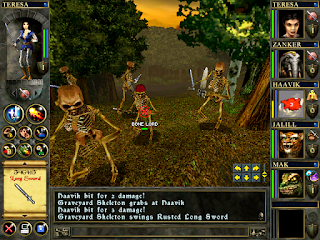