The second entry in the Mega Man Legends series followed the series' usual trends, keeping the core gameplay relatively intact but adding some improvements and general polish to try and make a more balanced game overall.  But does Mega Man Legends 2 succeed in being a more satisfying game experience, or does it spoil the broth? 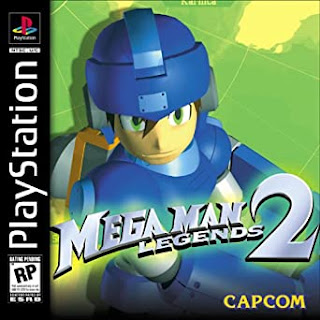 Mega Man Legends wasn't a success for Capcom, being met with relatively average reviews and mediocre sales, but it still found a following among enthusiasts of Zelda-likes as well as long-time Mega Man fans.  This prompted Capcom to try their luck at a spinoff game starring the series' breakout antihero, Tron Bonne, and later a followup to the first game.  While both games met with more positive reviews, they still didn't do particularly well in terms of sales, which ended up pushing the franchise into a long dormancy that continues today.

Something you'll notice right away is that Mega Man Legends 2 carries on the polished presentation of the original, with quite a lot of voice-acted cutscenes, expressive characters and an intriguing storyline building up to a large mystery.  The anime-like aesthetic returns, though now with more polished models and far less jagged edges and ugly, stretched textures.  Several music tracks return from the original game in addition to numerous new ones (replacing the conspicuous absent noise in most of the original game's dungeons), and all of them sound quite good; I especially like how each major area in the game has a leitmotif that carries between all the songs you'll hear there.  Even most of the same voice cast from the original game returns here, with the baffling exception of Mega Man having a new actor; he's not a bad actor or anything, but it's a bit jarring if you're coming straight in from the first game.  Load times have also been tightened up considerably, resulting in transitions between areas and save screens being much smoother than the original game.

The gameplay remains mostly the same, retaining the same awkward "tank control" movement and rotation even if you use the analog stick, but some improvements are made nonetheless.  Mega Man's movement is a bit sharper now, with less noticeable delay between pressing a direction and moving, and you can actually move while locked on to enemies now, making combat more fluid (and your sub-weapons considerably more useful), though it does have two irritating bugs - one is that there's seemingly no rhyme or reason to what enemy it will lock on to any time you press the button, which can be particularly annoying during the more chaotic battles, and the second is that if you take even the slightest of hits, you'll lose your lock-on and it will probably snap onto another random enemy; this can get extremely frustrating at times.  On the upside, the lock-on does introduce a useful bug, too - if you lock on to an enemy, hold down the fire button and tap Up on the D-pad, you'll reset your gun's cooldown and fire again immediately as soon as your stepping animation stops, effectively letting you fire as quickly as you can tap the Up button and rendering the Rapid and Energy stats mostly irrelevant.  They've also done away with the redundant 'shield' system from the first game; you no longer have to worry about it breaking mid-fight and taking more damage from subsequent attacks until you get it repaired.

Special weapons have seen some significant overhaul too.  While you can still only equip one at a time, enemies will occasionally drop powerups that refill their energy, so you don't have to get through an entire dungeon on one bar.  Or rather, two bars, as the game implements a mechanic where you can only use a weapon so much at a time, draining the green bar on the left half of the gauge; once you stop firing, it will draw from the larger blue bar to refill it.  As mentioned above, most weapons now also work in tandem with the lock-on, making you less likely to waste shots, although many of the stronger ones still plant you in place when you fire them.  Fitting the larger scale of the game, weapons generally cost much more to upgrade now, with some reaching well into the millions.  On the other hand, you have the opportunity to take timed trials to upgrade your Digger License, which makes the enemies in the game tougher but also causes them to drop more Zenny, in effect letting you adjust the game's difficulty and risk/reward ratio to your liking.

As mentioned above, Mega Man Legends is a considerably bigger game than its predecessor, having you explore numerous islands across the world, discover their secrets and undertake a number of optional side-quests throughout.  Dungeons are considerably more varied and hazardous too, with plenty of traps, more aggressive enemies and a couple of irritating 'status effects' you can be inflicted with; fire is a particularly bad one as it will continuously drain your health for upwards of thirty seconds, and there doesn't seem to be any way to put it out early (not even the otherwise-useless fire extinguisher weapon used to clear the intro mission, or taking a cue from Ocarina of Time and letting you roll to put the flames out).  You can also be 'paralyzed' by electrified floors, greatly slowing your movement speed and jump height and making it very difficult to avoid enemy attacks until it wears off (which also takes an irritatingly long time), or "decayed", which prevents you from firing your buster, also for an irritatingly long time.  On the other hand, you do get a greater variety of armor pieces this time; some of which help with avoiding status effects like these (though in the case of fire, not until after you've gone through the game's first major dungeon and probably been ignited several times throughout).  Seemingly taking a cue from Zelda, you can access consoles in major ruins to fully reveal the area map and point out the location of treasures within it, which definitely helps keep you caught up on potential equipment upgrades; a good thing, as some fights are very difficult without the right special weapon at your disposal.  Also like Zelda, there are underwater segments now, and one of the game's most irritating dungeons is one where you have to fill and drain the water to progress, with movement while submerged being very slow without the use of special boots.

Seemingly acknowledging the repetitive nature of the first game's boss battles, Mega Man Legends 2's boss fights are considerably more involved.  Circle-strafing still works on occasion, though many bosses are now fought in trap-laden rooms, cramped quarters or on small platforms that make it implausible.  The first boss fight in particular is a good example - a frog-bot that hops between several elevated platforms above a floor with constantly-respawning grub robots, and there are also robotic flies in the room that it can eat to regain health - destroying those, staying out of reach of the grubs and avoiding the frog's attacks all have to be juggled to win.  Other missions have a bit more strategy, like having to defend an air-dock from attacking robots, with your own shots able to damage or destroy barriers that prevent them from getting in.  One fight is even a direct reference to The Misadventures of Tron Bonne, with Tron utilizing similar tactics to the ones the player uses in that game.

So, while Mega Man Legends 2 does have some irritations with its long-lasting status effects, unpolished mechanics and being more grindy than the original in some ways, it is a substantial improvement in most others.  It's bigger, longer, has more boss battles, addresses several prominent shortcomings of the original game's design, and like the original, ends up being an enjoyable action-adventure-RPG experience despite its flaws.  It's a shame it never got much of a chance to shine, being released over a month after the debut of the Playstation 2 and the followup to an already relatively unpopular game, but it has quite a lot to offer any discerning fan of Zelda-likes.  It's gotten pretty scarce and expensive in recent years, but if you happen across a copy or are looking for some good PS1 classics to download to your Playstation 3, PSP or Vita, it's well worth picking up. 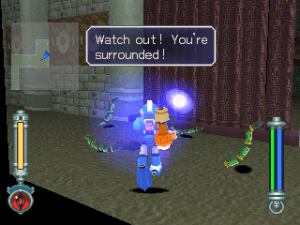 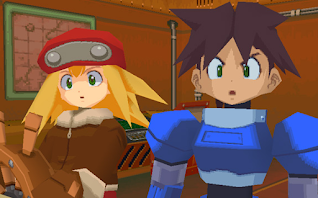 Developer: Capcom
Publisher: Capcom
Platform: Playstation 1, PC, PSP, PSN
Released: 2000, 2003, 2005, 2016
Recommended Version: I've only ever played the original PS1 version, both as a disc game and emulated on PSN, but from what I've read the PSP and PC ports are mostly identical (though the former was only released in Japan, and the latter only in Japan and Asia).