Westwood Studios was a pretty big name in the late '80s and most of the '90s with several well-received PC titles to their name - Eye of the Beholder, Command & Conquer, Toonstruck and Blade Runner probably being their best-known ones.  Nox was their attempt at an isometric action-RPG in the vein of Diablo, and a pretty inventive one for its time.  Gameplay is relatively fast-paced as movement isn't rigidly restricted to a grid, you can push around objects to safely trigger traps or find hidden passages, some walls can be broken down with your weapons to reveal secrets, and you can even jump to make a quick escape from groups of enemies or avoid ground-based hazards.  The game sports a relatively innovative "truesight" mechanic which dynamically blacks out portions of the map that are out of the character's line of sight, requiring you to approach dangerous angles with a bit more caution.  You get a quickbar that can store several pages of five spells or items each, cutting down on cumbersome inventory management and spell preparation during tense moments.  You also get a choice of three classes - Warriors can wield almost any weapon and heavy armor, but no magic or bows, Wizards have comparatively limited equipment choices and low health but can use any spells, and conjurers fall somewhere in the middle, mostly focusing on summoning or subjugating monsters to aid them in battle.  Multiplayer is also more varied than Diablo's, and in fact has game modes more reminiscent of a first person shooter - deathmatch, capture the flag, king of the hill, and so forth.  All good stuff; however, Nox was released only a few months before Diablo II, which eclipsed it in popularity almost immediately and continues to have a strong following even today.  Nox's fame was very short-lived in comparison, but it still enjoyed a fair bit of fame in its time thanks to a promotional tour by Westwood, which allowed visitors to play the game before it launched and provide feedback, as well as a company-sanctioned post-launch competitive tournament that allowed players to compete against one another, with top prize being a new gaming computer.  Sadly, not long after its multiplayer-centered 1.2 patch launched, rights for the game were lost to Electronic Arts, who officially ended its support cycle, canceled a planned sequel and closed down the official multiplayer servers, effectively capping off its legacy for good.  A mostly forgotten game these days outside of its small but dedicated community, but if you enjoy isometric action-RPGs of this type, it's one that's worth a go. 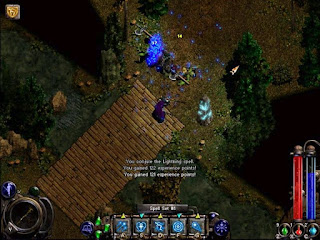