Eye of the Beholder II

The first Eye of the Beholder was a pretty well-received game, taking the familiar first person dungeon crawling format of numerous earlier games (particularly the genre classic "Dungeon Master"), adding a dash of real-time action and a heavy focus on puzzles, though it was pretty minimal in terms of storytelling, with its very abrupt ending being heavily criticized by many reviewers and fans.  The sequel (released the same year) utilizes the same engine and makes few changes to the overall gameplay, but puts significantly more focus on the storytelling element.  There are now substantially more NPCs to interact with and dialog options to pick from, and a larger variety of areas to explore from forests to caverns to temples, which adds quite a bit of variety visually.  Its more streamlined and linear design overall may be a turn-off to some, but even with that it's a fine dungeon crawler that showed off Westwood's talents as a developer.  It's a shame that the third Eye of the Beholder would be farmed out to SSI, who were on the verge of shutting down at the time and ended up rushing it out just to try and make a quick buck... 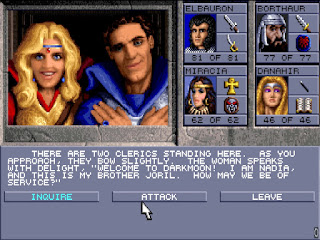