Dungeon crawlers aren't quite as prevalent in gaming today as they were in the '80s and early '90s, but they continue to have a devoted fanbase nonetheless, with gamers drawn to their addicting design - traversing a big maze full of monsters and traps, collecting treasure and solving puzzles is the quintessential RPG experience.  The Turbografx-16 had relatively few examples of the genre to its name compared to its competitors, and I imagine Double Dungeons didn't win over too many fans.  It's a pretty simple game overall- you just maneuver through a given maze, bop monsters, get money to purchase equipment and fight a boss at the end, with a second player optionally joining in (starting at a different point in the maze) to help you if you wish.  There's little in the way of narration (you just get a bit of text at the start explaining your "objective" for that stage, which has no bearing on the gameplay whatsoever), and there's basically nothing in the way of puzzles, traps or obstacles other than monsters.  There's virtually no penalty for death, either - you just get dropped back at the start of the maze and respawn to full health to try again, so the whole thing feels pretty insubstantial.  Just a bland experience in general, and having a second player along adds surprisingly little to the experience; surprising considering this is one of the earliest co-op RPGs I'm aware of.  But when Wizardry, Might and Magic and Ultima already had several defining entries on both consoles and PC, and hell, even the legendary Ultima Underworld wasn't too far off by the time this one was out, there's little reason to play Double Dungeons other than morbid curiosity. 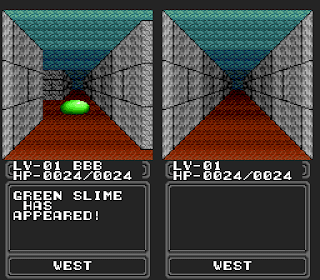