RPGs are a sight rarely seen in arcades; after all, they're almost always designed to be long and involved experiences, and an arcade's main motivation is profit - getting you to play very difficult games that subtly nudge you to put more quarters into the machine every few minutes.  Cadash offers side-scrolling gameplay somewhat similar to Taito's own Rastan series, though with some RPG elements worked into the mix - there are four classes to pick from, defeating enemies earns you experience points, and you can find and purchase items and equipment upgrades throughout the adventure.  Surprisingly, it's also an early example of a co-op experience - up to four cabinets could be wired together to allow four-player simultaneous gameplay, though all four players were restricted to a single screen and their movement governed by the position of the first player to create the game.  It's not the best-balanced game ever, either - the Priest is almost comically overpowered owing to having healing magic and quite powerful (and long-ranged) weapons, while the Mage takes a good while to become anything other than useless (and even then, his limited MP often reduces you to bonking enemies with a short-ranged staff).  As you'd expect from an arcade game, it is quite difficult, with a lot of enemies and traps that are tricky to avoid and deal hefty damage on a hit, and you're constantly racing against the clock on top of everything (though you can purchase more time in in-game shops, or when you die and continue).  While ultimately nothing amazing by modern standards and not especially popular even in its time, Cadash is an interesting experiment and an early predecessor to more successful co-op experiences like Diablo and Torchlight, and that makes it work a visit for RPG buffs. 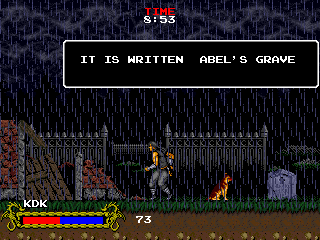 The Sega Genesis version is a somewhat more balanced experience from the arcade, giving you multiple lives per credit and generally less cheap enemies, though it lacks two of the playable characters (Priest and Ninja).  The Turbografx-16 port is more arcade accurate, with all four playable characters selectable, though it is also quite difficult as you get no continues without using a cheat code.  The arcade version also appears on Taito Legends 2 for Xbox and PC (though not the PS2 version).