Dragon Quest Builders proved to be quite popular with fans, but it felt a bit underfeatured, especially to those who had played Minecraft (and believe me, by this point basically everyone alive has).  So, in collaboration with Omega Force (yes, they do make other things besides Warriors games), a sequel was made, adding in features like flowing water, being able to build at greater heights, and even online co-op for up to four players, as well as slightly more sophisticated monster combat to add some spice.  It also comes with some slightly less savory design elements, though - namely, paid DLC.  Rather overpriced at that, as it just adds more things to build and the ability to fish (and build aquariums) at a pretty hefty price tag.  In fact, the PS4 version has even more as a "free" download, but only if you're subscribed to Playstation Plus.  There's still enough game and lore nods here to satisfy Dragon Quest fans, but if you're looking for a more complete sandbox building experience, just stick to Minecraft, which has plenty of amazing (and free) mods to change the game to whatever preferences you have. 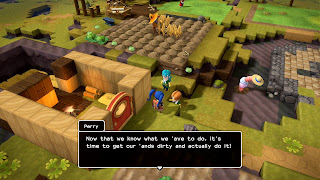 I've been informed that the PC and XBox One versions include all of the DLC content at  no extra cost, so you may want to grab one of those if the extras appeal to you.