Willow is based on the 1988 fantasy film of the same name, which probably brings to mind a lot of other mediocre-to-terrible movie tie-ins.  However, Capcom always put their all into everything they did in the NES era, licensed games included, and several of theirs are still regarded as classics today (Ducktales in particular got both a rerelease on the Disney Afternoon Collection and a remake by WayForward in recent years).  Willow is certainly no exception to that rule, either, taking the format of Legend of Zelda and adapting the film's plot to it in pretty fine fashion.  It works in a bit of an experience system, as well as some slightly more sophisticated swordplay - if you press the attack button while moving you'll do a forward thrust, and pressing while stopped will do a slower sweeping slash that covers a wide area, potentially knocking away multiple enemies.  Throughout the game you'll also find new equipment and spells to bolster your abilities, and battle some surprisingly tricky bosses.  Per Capcom standards, the game also has wonderful animation, detailed graphics (I like how the wind blows the grass and trees while in combat) and some quite good, atmospheric music.  A less talked about Capcom NES game, but that doesn't mean it isn't great. 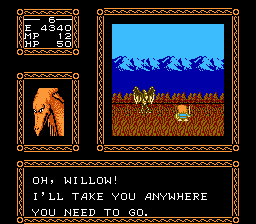