Legacy of the Wizard

The fourth game in the Dragon Slayer series; a name not very well known in the west, but Japan knows it as one of the first action-RPG series ever made.  That said, each game in the series is a very different experience, from top-down dungeon crawls to tactical combat experiences.  Legacy of the Wizard is certainly no different, having you control five family members who each have differing abilities, and navigating a rather enormous maze in search of a magic sword that can slay an evil dragon.  Each family member gets a different set of items to utilize, and with these, they can reach a section of the dungeon no other can and retrieve one of the four crowns; Xemn (the father) gets a glove that can push blocks around; Lyll (the daughter) can destroy blocks with a mattock and leap to absurd heights; Meyna (the mother) can fly using magical wings; Pochi (the family pet) is a monster and therefore ignored by nearly all other monsters in the dungeon (even being able to use them as platforms); and finally, Roas (the son) is the only one who can wield the Dragon Slayer sword, necessary to defeat the final boss.  It's a game that definitely requires the manual or a strategy guide, as there's very little text in-game and no explanation given for what all the items actually are or how they work, but there's a surprising amount of fun and depth to be found here.  You'll also need to master some very precise jumps and quirky controls (especially for the block-pushing with Xemn's glove), but the charming graphics and an amazing soundtrack by Mieko Ishikawa and (of course) Yuzo Koshiro keep it fresh even despite some irritating design elements. 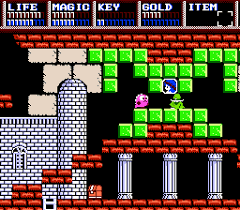