One of the first NES RPGs to ever be localized, it's also one that's a common target for caustic reviewers, beginning with internet comedian Seanbaby famously deriding it as the worst NES game ever made.  That's a bit hyperbolic, of course - there are far worse NES games out there.  But that doesn't mean Deadly Towers is some kind of hidden gem - it earns pretty much all of the criticism it's gotten.  Each of the game's towers is an enormous, convoluted maze with a room count well into the triple digits, with nearly every screen being packed to the brim with monsters.  To make matters worse, you're a rather large target, and virtually every screen has you taking a cheap hit from an enemy as soon as you enter and/or features ledges you can easily fall or get knocked off of, resulting in instant death.  Even the game seems to be aware aware of this; each death dispenses a password and then, upon pressing Start, you're immediately dropped back at the start of the game, retaining all the powerups and gear you'd collected save for your money (which is reset back to 50).  It's also easy to stumble into invisible warps that take you to new areas (and even some 'beneficial' items do this), making navigation even more of a pain.  Combat isn't much fun either - you can throw a single sword at the start and are completely defenseless until it lands or goes offscreen; once either happens, you can throw another, so defeating nearly all enemies is just a matter of getting up next to them and spamming your sword until they die.  Upgraded swords behave the same, just traveling faster and doing slightly more damage, so there's virtually no variety to the combat.  The graphics are serviceable for a 1986 Famicom game, if rather uninspired, and the music is decently composed, though the fact that the tracks are so short and reset to the start every single time you enter a new room means you'll get tired of them quickly.  I'll at least cut it a little bit of slack, though - Japanese RPGs were still in relative infancy at the time, most early examples of the genre tended to be pretty rough, and the vast majority of them pre-1987 or so are only worth a quick look nowadays as historical curios.  Only a little bit, though; after all, Deadly Towers came out several months after Dragon Quest and The Legend of Zelda did in Japan and a month after Zelda's debut in the US.  As for which of these games are still worth playing through today and which are only of passing interest to gaming historians or sheer masochists, well, that's a no-brainer. 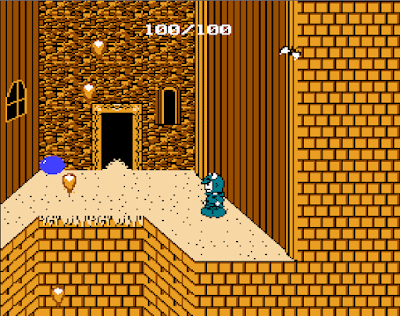