Advanced Dungeons and Dragons: Heroes of the Lance

Released on computers as part of SSI's "Silver Box" line, Heroes of the Lance is a loose adaptation of the DragonLance series of novels inspired by the eponymous D&D modules, and a relatively unique take on the D&D format, focusing on real time action rather than turn-based strategic combat.  Decent enough for a 1988 computer game, especially in a period where computers were still generally considered "business machines" and thus side-scrolling action gameplay like this was pretty novel (if not particularly well-suited to the hardware), but its 1991 NES port is another heavily derided game on the platform.  The ugly graphics, irritating music and stiff controls didn't endear it too much to fans of side-scrolling action games like Super Mario Bros, while RPG fans were let down by the absence of narrative and the general lack of depth to the game's combat and dungeon crawling.   Despite being an action game everything is still centered around dice rolls, so it's not a matter of skill-based attacking and evading; instead, you mostly just stand toe-to-toe with your enemies and hold down the A button to swing at each other until one of you dies.  Disarming traps is solely a matter of having the right character in the front of your party (or taking the hit - they rarely do much damage anyway), and most offensive spells you have are pretty useless.  Oh, and it's also possible to make the game unwinnable - if Goldmoon (or another character carrying her staff) drops into a pit, you're done; that staff is the only thing that can kill the final boss.  But most insulting of all is its length - while it takes place in a fairly large and convoluted maze, once you know the route to go through and how to counter the few enemy curveballs it throws at you, you can beat the whole game in under ten minutes.  Even for masochistic fans of bad games, it's too short, easy and lacking in nuance to provide any ironic entertainment value.  Hell, it hardly even seems worth the effort to pan it on my nerdy site about RPGs; everyone who knows the NES port is already aware it's a sucky game that's widely regarded as one of the worst on the platform, and I don't have much to add other than to confirm it really is bad, but not even in a way that makes it interesting.  Unappealing, lame and entirely forgettable, Heroes of the Lance is just a lousy experience no matter what angle you come at it from. 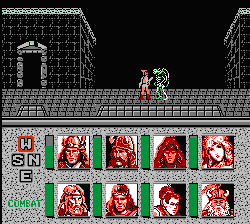