Heroes of the Lance (the first adaptation of the Dragonlance novels and tabletop modules) was decently received on computer platforms while its NES incarnation was heavily maligned; both for its much worse graphics and just being an underwhelming game in general, providing nothing satisfying to RPG fans nor comparing favorably to other action-oriented titles on the system.  Strangely, that didn't stop them from trying again, though the sequel game would only be released in Japan for the Famicom.  Still, those who played it saw a marked improvement within only seconds of starting - there are now dialog scenes advancing the story at key points and a top-down world map (with visible monsters rather than random encounters!).  The presentation is much improved - still not great, but the graphics are much cleaner and the music isn't nearly as grating to listen to.  Even the action has seen much improvement, doing away with the dice rolls and having actual hit detection based combat, as well as the ability to jump and duck to evade attacks.  That said, it's still a very short game (beatable in roughly an hour once you know where to go), and the exploration element is still overly tedious, with both monotonous side-scrolling and top-down maps to make your way through.  Dragons of Flame is worth a brief look as a much-improved sequel to a notoriously awful game, but still far from matching up with other top-tier action-RPGs on the platform. 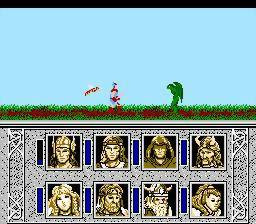