The third and final game in the Dragonlance adaptation trilogy, the only one to never be ported to consoles, and a stark departure from the first two games in terms of style.  Indeed, it does away with the sidescrolling element completely to focus on real time tactical combat.  You lead a point team of four units (picked from a roster of about twenty) and attempt to escort refugees to a safe haven, traveling across a sprawling map and encountering various events as you go; mostly in the form of battles with bandits and monsters. In battle you can select a unit's general (automated) strategies as well as temporarily pause the action to pick individual actions for them to take, and after winning a fight you can simply select a command to fully heal up any injuries you sustained.  There is some light dungeon exploration, NPC interaction and item management involved too, though the main focus is on keeping your refugees alive, keeping morale up and getting them to safety, earning a higher score the more you keep intact; sort of like an early take on the Banner Saga. It's overall a bit repetitious and not especially deep, but for taking the action-driven D&D experience in a fresh new direction (one that would be replicated in later games like Baldur's Gate and Neverwinter Nights to much greater success), Shadow Sorcerer is easily the best of the trilogy. 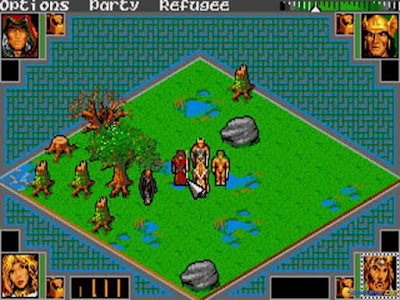