Arguably one of the Playstation 4's defining games, it also marked a distinct turn in style for its developer, Guerrilla Games, who before this were mostly known for the Killzone series of first person shooters.  For Horizon, however, they did something very different; an open world RPG set in a post-apocalyptic scenario, having the protagonist kill enormous mechanical animals with bow, spear and traps, putting focus on stealth over direct combat (which is best used as a last resort as you die in only a few hits).  This is easily the most fun part of the game, too - you get a ton of different tools to utilize, from flaming arrows to tripwire traps to being able to temporarily reprogram enemies to attack each other or use them as mounts to travel much more quickly, and you can even use your "Focus" to tag enemies and track their movement patterns, letting you set up traps and spot potential hazards well before they see you.  As you defeat enemies and clear quests you'll gain experience, which grant you even more options, from being able to perform short-range stealth kills to leaping attacks to scavenging more parts.  Weapons and armor can also be fitted with randomly-dropped modifications, giving damage and protection bonuses respectively.  It even seemingly takes a few cues from its competitor Breath of the Wild, with the player able to purchase upgrades to slow down time when aiming with the bow mid jump/slide and a potion crafting element to get a temporary boost to some attributes.  That stuff's all a lot of fun, though I didn't find the overall story nearly as engrossing - its characters are generally pretty boring and one-note (including Aloy) and there's an unpleasant and hostile tone to almost every interaction you come across, which doesn't make them particularly enjoyable to sit through. The plot is fairly cliched and predictable if you've seen any other story of this type, and you don't get too many memorable NPC interactions.  The few that are there mostly utilize that irritating Mass Effect style of dialog where all your choices are picked from vague choices on a wheel and it cuts between the same two over-the-shoulder shots over and over again as characters converse, which I never particularly cared for even if they are well acted and lip-synced.  Still, these are a fairly minimal part of the experience once you get through the intro, and they were never annoying enough to push me away from the stronger elements.  Horizon came out at nearly the same time as Breath of the Wild and it proves to be a surprisingly solid competitor, even selling a comparable number of copies (over 20 million as of February 2022).  That said, for my money Breath of the Wild is still a significantly more refined and overall stronger open world RPG experience. 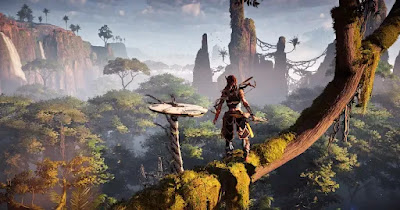