A game with a small but dedicated following for its innovative premise, EVO has you follow the evolution of life on Earth through the lens of an action-RPG experience.  Beginning in the primordial oceans as a small fish, you gradually earn "Evolution Points" by defeating enemies and consuming their meat, which allow you to evolve to new forms, earning traits like sharper teeth (more damage), a larger body (more HP), larger fins (faster movement), and so forth.  After a series of stages you of course battle a boss, and after that you move on to the next age of life on earth, eventually reaching the age of early man.  It is even possible to evolve into a human through a series of obscure steps, and it is quite a powerful stage to reach, though the downside is that you cannot evolve any further from there.  A great concept, though the gameplay itself leaves much to be desired - it's got pretty generic stage design overall and combat is relatively shallow.  Frustrating at times too, as your attacks have short range and a substantial windup while enemies can often damage you through simple contact.  It's also not a terribly impressive game visually, though the soothing soundtrack by legendary (and controversial) composer Koichi Sugiyama is quite nice to behold.  EVO is a game with a great concept and gameplay not quite strong enough to make it a classic, but it visits a rarely-explored premise in gaming in a unique way, and that alone makes it worth a closer look. 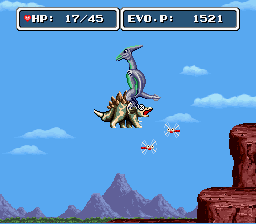