Battle of Olympus was another game that closely copied the format of Zelda II, almost to a T in some respects - hell, the protagonist's walk cycle and animations in general look very similar to Link's.  It's not completely derivative, though, working in a more complex upgrade system (that requires a fair bit of item farming) and a currency system, as well as having a general theme of gaining new powers and weapons by visiting the Greek gods at their temples, which is pretty fun.  It's also not the easiest game to navigate, as where any given doorway leads seem rather arbitrary; sometimes you'll go into a door in a tree and end up in a sprawling house, while other times you go into what looks like a house and end up in a different part of the overworld.  Combat can also be frustrating in places, with numerous enemies seemingly all designed to attack from angles you can't easily block or evade; not aided by your character's very short and specific weapon attack range.  Bats swoop down from above, slimes fall from above and then are too short to hit with your weapon on the ground, and even the first minor boss of the game (Lamia) shoots arrows just above shield height, necessitating that you jump and strike at precisely the right moment without touching her, which will also damage you.  Not to mention each hit you take knocks you back a fair distance, which can be quite frustrating in areas with instant death pits (which there are a lot of).  Battle of Olympus still has a fan following, and I can see why, but I don't think it's aged particularly well. 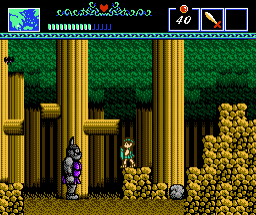