The debut game of Rad Codex, and even at this early stage, they showcase quite a bit of talent.  Some detailed, well-animated spritework, surprisingly robust and bug-free design, and the best implementation of a Final Fantasy Tactics style mix-and-match class system I've seen outside of that game.  No kidding - you pick a primary and secondary class, can equip up to three sub-abilities to bolster your abilities, and combat earns you experience points for your primary class, which you can then spend to unlock more abilities.  Every 250 experience you earn will also give you one star to put into proficiencies (more damage with particular element or weapon types) or bolster one of your base stats, making things easier for you in the long run.  The premise is an interesting one too - parts of the world are being stolen and arranged into an enormous labyrinth - but the level design is a bit lacking compared to Rad Codex's later games, with a lot of enormous, desolate corridors to follow, so knocking enemies into traps and using the environment to your advantage is a relatively rare sight here.  Still, a very impressive first effort for a solo indie developer, and one that's well worth picking up. 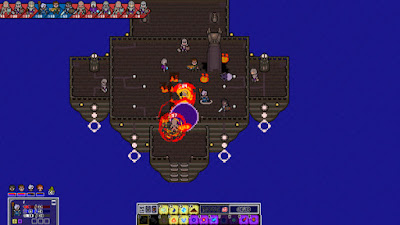