As much as people like to rag on Zelda II these days, those who were around in the '80s and early '90s will be glad to point out that it was quite an influential game in its own right. Westone's Monster World franchise drew inspiration from it, as did several prominent NES copycats.  One of the best of these was Hudson Soft/Falcom's Faxanadu (itself a spinoff of Xanadu, the second game in the Dragon Slayer series).  Faxanadu works in a few more RPG elements than Zelda II did, most prominently in having money and shops to purchase items from, and more focus on item-farming and key purchasing to get into various places.  Having some delightfully grotesque monster designs, detailed character portraits and backgrounds and a downright bizarre storyline all help to make it a unique and entertaining experience, and definitely one of the NES's more overlooked action-RPGs. 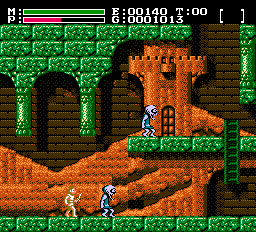