After playing Horizon's Gate and finding myself quite impressed with its quality - both the solid engine and its surprisingly deep, Final Fantasy Tactics styled mix-and-match class system - I of course was eager to check out the developer's other games as well.  He had two others released prior, and both utilize a very similar, if slightly less refined, style of gameplay.  Alvora Tactics takes that and mixes in a bit of dungeon crawling, having you explore the body of an enormous dead serpent with randomized floors, enemy encounters and loot as you make your way through.  Returning to town lets you purchase new upgrades - not just in the form of equipment, but also larger party size, new characters and other benefits like experience sharing, and of course, through battle you can build yourself up from the scrubby base classes to badass hybrids capable of mowing down all manner of giant nasties.  Not quite as refined as HG, but another very worthy outing for fans of high quality indie titles and tactical combat. 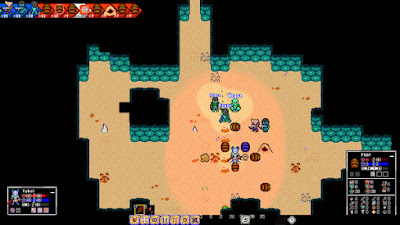