Beginning with games like Hydlide and Dragon Slayer and reaching new heights of success with the Ys and Zelda games, action RPGs began to branch out into different genres as well.  The Guardian Legend combines the idea with that of a scrolling shoot-em-up, but does it prove to be a worthwhile outing, or just a misstep? 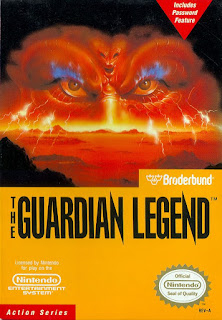 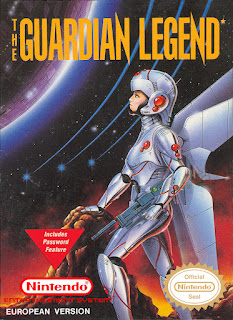 Compile (formerly Programmers-3 Inc.) was a pretty prominent Japanese developer in their time, creating a variety of games for numerous computer systems and early consoles, from the Apple II to the MSX to Sega's first console, the SG-1000.  However, they quickly became known for their shoot-em-up games, with their breakout game in the west being Zanac.  A 1986 scrolling shooter with a pretty innovative element for its time in the form of adaptive AI - if you miss shots, collect powerups or allow the camera bots that periodically flew in from the top of the screen to escape, the AI would gradually get more and more aggressive, while losing a life, destroying camera bots or starting a new stage would cause fewer enemies to appear for a short while.  Later shoot-em-ups under their banner would also branch out in creative ways, with inventive powerup systems, unique settings and bizarre bosses, and they remain fan favorites today for that very reason.
The Guardian Legend is one that also has a small but dedicated fanbase, and it's easy to see why, as it combines their penchant for fast-paced shooting action with the top-down dungeon exploration of something akin to Zelda or Metroid.  Playing as a gynoid known only as "The Guardian" who can change between a humanoid and a spaceship form,  both get put to heavy use throughout the game.  In humanoid form you explore the game's eleven "Areas", which serve as the game's dungeon segments.  As in games like Zelda, each one is a large and fairly intricate maze with plenty of secrets to find, clues to uncover and occasional rooms that will close you in and pit you against a mini-boss.  You won't be able to fully explore them all the first time you go through, either - often doors will be locked off by certain symbols, which you'll have to come back later with the proper key in order to bypass.  Areas are interconnected with Corridors, which serve as the game's shoot-em-up segments and the primary action focus - you'll have to travel between them quite frequently and battle increasingly-difficult bosses as you make your way to new areas.
The shoot-em-up segments fit best into Compile's wheelhouse, and they certainly don't disappoint here, with some fantastic fast-paced action, smooth animation and grotesque monsters to battle in each one.  You get quite a few weapons to battle your way through with, too - your basic rapid-fire forward shot costs nothing, but you also earn other subweapons that cost Chips (the game's currency) to fire - from a steerable wave beam to a barrier that absorbs shots to a two-way beam that fires behind you, and even a short-ranged "sword" that deals heavy damage but puts you in close proximity to the enemy, making it a risky option.  Another special weapon comes in the form of "Enemy Erasers", which serve as a screen-clearing bomb; while they do no damage to bosses, they do wipe their projectiles from the screen, so they do prove quite handy even late in the game.  Unlike most subweapons they cost no chips, but they are also finite in use, so conserving them for tight situations is a good idea.  Twitch skill is key above all else, though - you get very little after-hit invincibility so attacks can quickly drain your health.  That said, it's not as punishing as it sounds - your health can drain to zero from one solid hit, but you must take another hit after that before you die, so you have a bit of a safety buffer.  The game also frequently drops health-restoring capsules for you during the Corridor segments, even during boss fights, so as long as you're diligent about grabbing those, you can stay alive.
Chips fuel your subweapons, but also serve as the game's currency in the shops you may come across along the way.  Here, you can purchase new subweapons (or upgrade existing ones) and the odd health upgrade.  Powerups are primarily found in the Area mazes, and fit into the RPG mold, boosting your maximum health, defense, attack power, firing rate and Chip capacity when you find them.  There is even a rudimentary 'experience' system in the form of your score, which will give a boost to your maximum health when you reach certain thresholds; one should use some caution not to max out the score at 9,999,999 points though, as this will lock the game owing to a bug.
The Guardian Legend is an unusual pairing of shoot-em-up and action RPG elements, but it works out surprisingly well.  Fittingly for a Compile title, it's a highly polished, fast-paced shoot-em-up with some competent dungeon-crawling action, there's enough content here to keep you entertained a good while, and the presentation is fantastic, with some delightful atmospheric music, smooth animation and well-realized environments to see and creatures to battle.  There's even some of Compile's quirky humor with the strange boss names like "Grimgrin" and "Crawdaddy", and the creatures known as "Landers" who double as powerups when you find them.  Even for someone who's not the biggest shoot-em-up fan like myself, it's a wonderful NES game that's well worth checking out. 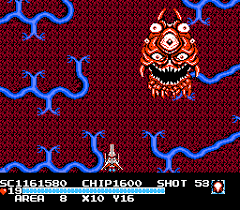 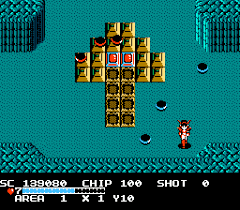