Interplay's 1990 adaptation of Lord of the Rings for various computer platforms was a pretty decent one for its time, taking the skill-based roleplaying element of games like Wasteland, having an engine and game world somewhat similar to Ultima VI, and being a relatively faithful adaptation of the books besides.  The 1994 SNES game of the same name is a much different beast. largely exhuming the RPG elements of the original in favor of a more action-driven experience.  In fact, it seems to draw some inspiration from 1993's Secret of Mana, allowing up to five players to join in the action via the SNES's Multitap peripheral and battle their way across Middle Earth.  But while I'm admittedly no big fan of Secret of Mana,  I can say that is a much superior experience to this one - the rather drab world design of the computer game carries over here, meaning you'll be wandering through an awful lot of dull, indistinct corridors (and enormous dungeons comprised of the same) on the way to your goals.  The story is also padded out to the point of inanity with dull fetch quests, and even the gameplay itself is bland - there's no new equipment to earn and only a few utilitarian items to find, and no means by which to revive fallen allies - once a character is dead, they're gone for good.  The whole thing is pretty tedious and not very fun - even moreso if you're playing alone, where you have to put up with lousy party AI that runs headlong into danger and dies almost immediately (also a common problem in Secret of Mana, I found).  Even some detailed graphics and wonderfully-realized music and ambient sounds for the hardware can't make it any more exciting, making it a game that was pretty quickly forgotten in its time and one downright dire compared to modern action-RPG outings.  Which may explain why Vol. 2 never got a console adaptation. 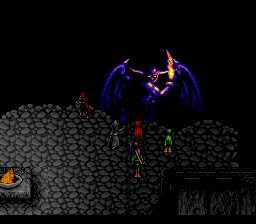